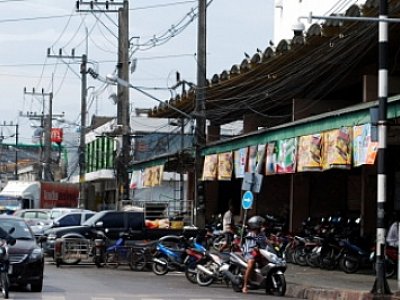 PHUKET: The Phuket Provincial Administration Organization (OrBorJor) is about to install 189 CCTV cameras throughout Koh Kaew and Rassada at a cost of 29 million baht.

The roll-out is phase two of the OrBorJor‘s “citizen safety” campaign, which will coordinate with police in providing CCTV footage of traffic accidents and other incidents, explained OrBorJor President Paiboon Upatising.

The cameras, some fixed-position and others with 360-degree views, will relay footage back to a control center at the OrBorJor‘s hospital in Rassada.

Among the areas to be targeted by the phase-two roll-out are the Sapam local market and the area around the Phuket Rajabhat University campus.

“Phase one of our CCTV campaign involved installation of 53 cameras throughout Phuket Town, with the cameras feeding a control center set up at the Phuket Provincial Police Station. This proved very successful and very useful for police investigations,” said Mr Paiboon.

In this phase, the cameras were installed by Advanced Information Technology Plc under a budget of 16,893,160 baht.

“In phase three, we will install another 300 CCTV cameras that will also provide video feeds to the control center at the hospital. We have yet to decide where and when to install the cameras for that phase. We will see what the completed phase two looks like and then decide on phase three later,” he added.

OrBorJor Supplies Officer Chuthaporn Chantet told the Phuket Gazette that under the government contract for phase two, the Phuket branch of CS LoxInfo Plc is to complete the installations by January 19, 2012.

“The budget is 29,838,000 for the entire project, including wire installation and the control room at the hospital.

“LoxInfo will install 142 CCTV cameras at 38 locations in Rassada, plus nine cameras at six locales on Chumphon Road. In Koh Kaew, 38 CCTV cameras will be installed at eight locations,” she said.

Ms Chuthaporn explained that OrBorJor officers will be assigned to monitor the video footage at the control room during normal office hours.

“However, many other details, such as the precise working hours, have yet to be decided,” she said.