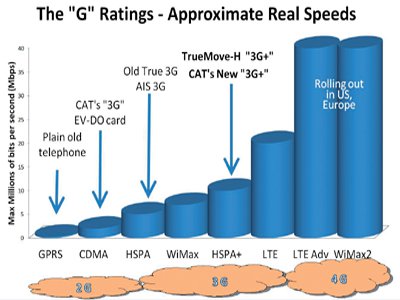 PHUKET: First the good news: CAT, like TrueMove-H, is coming out with an HSPA+ service.

As you may recall, HSPA+ is the only real “3G” available in Thailand and, at least in theory, it should be substantially faster than other “3G” services currently available – including, confusingly, the service CAT currently calls “3G.”

Let’s start with the basics. The term “3G” doesn’t mean anything. It’s marketing sizzle with absolutely no steak behind it. Most of all, it’s confusing when every Tom, Dick and Harry Internet Service Provider calls any sort of wireless internet product “3G”.

Thailand isn’t unique: lawsuits are being fought right now all over the world over the confusing terminology. A kid on the corner can put together a string and two tin cans and call it “3G”.

But let’s face it. The name 3G sells and it’s their job to sell you whatever the market will bear. It’s your job to figure out if what you’re paying for is worth the money. To help nudge you in that direction, I’ve re-published here a graphic that I originally distributed about six months ago, updating it with information about the latest services available in Phuket.

Right now, if you have a CAT 3G dongle for wireless internet, you’re using a technology called CDMA/EV-DO.

You may have found out that CAT’s 3G doesn’t work with any common 3G telephone or tablet. As of early December, that’s going to change.

The old True 3G system – which you can’t get any more – ran on a technology called HSPA. AIS also uses HSPA technology for its 3G service, which is currently the only 3G service you can get on most parts of the island.

The new TrueMove-H 3G system, which True calls “3G+”, uses HSPA+. Theoretically, HSPA+ is much better than HSPA – it runs much faster, over greater distances, and accommodates a larger number of simultaneous users. But it’s also more expensive. Most phones and tablets these days can use HSPA+ but if your phone can’t hack the faster system, it will fall back automatically to HSPA. You don’t need to do anything.

I just discovered recently that CAT is planning to move from its old CDMA/EV-DO system to a new HSPA+ system. The change is supposed to take place in early December. As my friend reminds me, they never say December of which year, but I suppose it’ll be out sooner or later. CAT HSPA+ (the official name appears to be “My Click”, as best I can tell) has some significant implications for all of us potential wireless customers.

First, it’s going to be cheaper than any other 3G system out there. I’ve seen CAT’s price list, and they’re going to sell a new dongle (the D-Link DWM-156) for 1,890 baht. The service will run at 590 baht per month, compared to 790 baht for AIS and TrueMove-H. It’s capped at 4 GB per month, after which the speed gets knocked down to 256 Kbps. (AIS caps at 5 GB, TrueMove-H caps at 3 GB, although both may change as soon as they hear about CAT’s plans.)

Now here is the bad news: Current CAT “3G” CDMA EV-DO customers won’t be able to get the new signal with their old equipment. And they won’t be offered a free or reduced-cost upgrade to the new technology.

However, I’m assured, the old CDMA EV-DO service will continue to work, for the foreseeable future.

Contrast that upgrade approach to True, which killed its old 3G service when the TrueMove-H service rolled out, and ticked off more than a few customers along the way. To its credit, True upgraded customers for free. But they didn’t roll out the new network all over the island, and they left many customers without any 3G service for months. More about that in a future Live Wire.

Bottom line: even though you can’t get this new CAT service right now, this looks like a worthy contender in the 3G wars. Soon we should have three competitors – and that’s good for everybody.

It remains to be seen how fast CAT’s new My Click will run in the real world.

For that, we’ll all need to watch the speeds that are reported on PhuketInternetSpeed.com.

Now you know why I’ve been recommending that people avoid the CAT EV-DO card.

Live Wire is Phuket Gazette columnist Woody Leonhard’s weekly snapshot of all things internet in Phuket. Follow him on Twitter: @PhuketLiveWire; “like” his page at facebook.com/SandwichShoppe; or visit his free Sunday morning computer clinics at Woody’s Sandwich Shoppes.