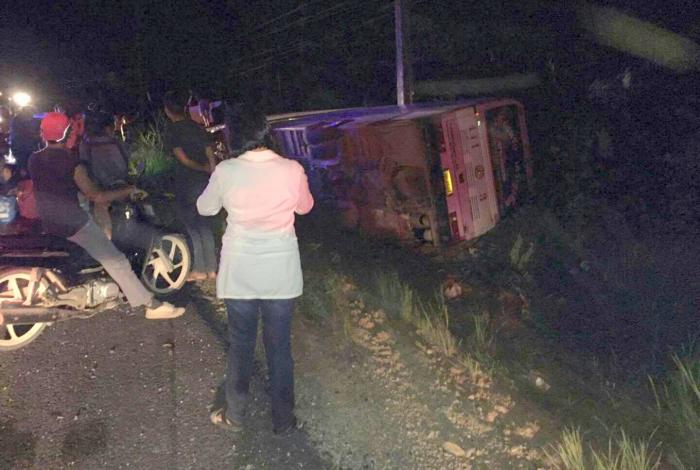 PHUKET: A bus headed from Phuket to Trang flipped on its side and crashed into a power pole in Krabi last night, injuring the driver and 22 passengers on board.

“It happened on a straight road with no turns, but some part of it is under construction. When we arrived, we saw the pink and white colored bus lying on its side in a small watery ditch. It was badly damaged as it had also hit an electric pole – people were struggling to find their way out of it and were crying in pain,” said the captain.

Rescue workers pulled all the passengers out of the wreckage. Twenty-one were reported to have minor to medium injuries and one woman was seriously injured. They were rushed to Ao Luek Hospital, where all were discharged except one woman who is being treated for a serious hip injury.

“The 58-year-old bus driver, named as Jaran Piyawet, also received minor injuries,” confirmed Capt Suwit. “He told us that the bus’s right wheel hit something on the road. He lost control and the bus careened across a lane, hit the electric pole and flipped on its side. He also said it was lucky that the bus didn’t crash into any other vehicles.”

Mr Jaran was charged with reckless driving causing injury, and was taken for alcohol and drug testing.