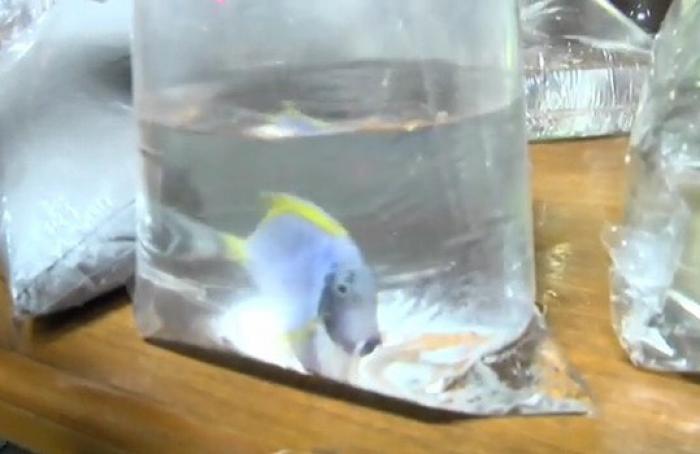 Several rare and endangered marine creatures were found hidden in the luggage compartment when officials stopped the bus for a random check.

“We were conducting checks in accordance with the orders of Phuket Provincial Police Commander Teeraphol Thipjaroen. While we were scanning the storage area, we came across two boxes that looked like they had been intentionally hidden from view, so we asked to open them,” said Tah Chat Chai Police superintendent Col Prawit Sutthirueangarun.

“We found 32 rare and protected marine creatures inside 10 plastic bags, including nine varieties of beautiful and colorful fish, three Hymenocera picta, hermit crabs, sea shells and others,” he added.

No one on the bus claimed ownership of the boxes. The bus driver told police that two men had paid him to deliver the boxes to Bangkok. The driver could not provide the names, as he had not asked the men for any documentation.

“The names and contact numbers of the recipients were written on the boxes, but we haven’t been able to get in touch as yet. We are investigating further to find the owners,” said Col Prawit.

The creatures were later taken to Phuket Marine Biological Center (PMBC) for treatment. During this time, they will also serve as evidence against the suspects behind this operation.

“The PMBC will categorize these creatures. They will receive treatment and full restoration before being released back into nature,” said Suchat Rattanaruengsri, Region 6 head of the Marine and Coastal Resources Conservation Division.

The sale of endangered marine creatures is in violation of the Wildlife Preservation and Protection Act, as well as the Enhancement and Conservation of National Environment and Quality Act, for which the maximum penalty is four years imprisonment, a 40,000 baht fine, or both.