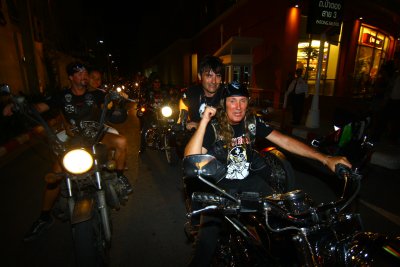 PHUKET: Hundreds of bikers have dropped out of Phuket Bike Week because of the red shirt protests in Bangkok, according to the president of the Thai Hotels Association (Southern Chapter).

Suchart Hirankanokkul, who recently replaced Methee Tanmanatragul as head of the association, said 3,000 bikers had been expected to take part in the annual festival.

Around 20 percent have dropped out due to safety fears, he said.

The event will take place from April 9 to 13 in Patong.

Mr Suchart said that although direct international flights to Phuket International Airport were largely unaffected by the Bangkok protests, arrivals on connecting flights from Bangkok from China, Korea, Japan, Hong Kong and Taiwan were significantly down.

In general, the numbers of tourists in Phuket seemed to be down this year, Mr Suchart said.

“During the Songkran holiday there will be more Thai people coming to Phuket than foreigners,” he added.