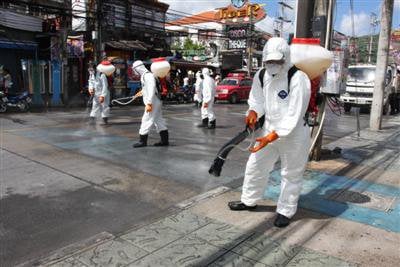 PATONG, PHUKET: Public health workers in full anti-contamination gear sprayed and fumigated Soi Bangla yesterday in a bid to prevent the spread of contagious diseases like swine flu and chikungunya.

The high-profile initiative followed a single confirmed case of swine flu infection by a staff member at a Patong disco last week.

Tourists and local businessmen alike were curious about the anti-disease campaign, which involved a number of health officers dressed in Tyvek suits and respirators fumigating sewers with pesticides and spraying an antibacterial solution onto surfaces inside discos and on the streets.

PPHO officers also distributed free face masks to reporters, health workers and some tourists in the area to prevent them from ingesting the antimicrobial substances.

However, health workers assured the Gazette that both the antibacterial foam and pesticide smoke posed no real health hazard.

“If it were hazardous we wouldn’t be allowed to spray it – and we would be the first to be affected too,” one of the workers said.

Vice-Governor Worapoj said the “big cleanup” follows a visit to Patong by a tourist who developed flu symptoms and was later diagnosed with infection by the A(H1N1) virus after returning home to his native Hong Kong on June 8.

Since then, about 90 people in five Patong discos have been tested for the A(H1N1) virus that causes swine flu. Of these, one tested positive. She is now undergoing a seven-day quarantine and her condition is improving, Vice Governor Worapoj said.

“Soi Bangla is the first clean up area. We plan to conduct similar clean-ups at other public places around the island, such as government offices. We are also encouraging the private sector to conduct its own clean-up initiatives. This policy will raise public awareness and increase confidence among tourists that Phuket is free of swine flu,” he added.

Sompetch Moosophon, president of the Patong Entertainment Business Association, told the Gazette that tourists had a good and realistic understanding of the threat posed by swine flu.

“There is no panic. We just advise people to avoid touching their hands to their faces. Swine flu still hasn’t had any effect on travel Patong. We have around 400 entertainment venues in Patong, 200 in the Bangla area. Most are open air. We all understand the situation and are not panicking over it,” he said, adding that business was always down this time of year.

Phuket to Montana: Thanks for a great event!