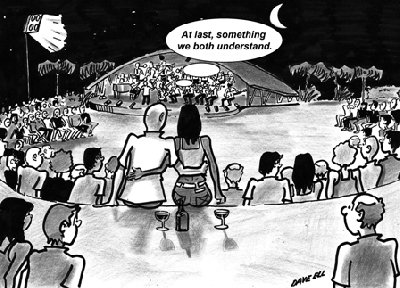 (PHUKET): Phuket’s tourism industry is currently mired in the low season doldrums and there has been little to report in recent weeks to buoy enthusiasm. There has been plenty of talk recently of abysmal occupancy rates, imminent staff layoffs and factors conspiring to keep tourists away – from swine flu to the recent spate of drownings.

Given the malaise, the recent concerts by the Montana State University (MSU) Symphony Orchestra could not have come at a better time.

To our knowledge, the concerts were the first performed by a full symphony orchestra on the island since the Bangkok Symphony Orchestra (BSO) were seated on plastic chairs and crammed onto a stage in Patong’s Soi Bangla in January 2005 – less than a month after the tsunami.

Unfortunately for music lovers, that event became ‘Patongified’ when numerous “entertainment complexes” in the area refused to lower the sonic boom of their sound systems so that the acoustic orchestra could be heard, let alone appreciated. Not surprisingly, the BSO hasn’t performed in Phuket since.

The MSU orchestra’s visit to Phuket came as part of a “goodwill tour” organized by the Phuket Provincial Administration Organization and Rajabhat Phuket University, both of which are to be commended for bringing them here.

That said, more advance notice could have helped bring in greater numbers, especially to the first show, which was held on a beautiful moonlit night at Suan Luang Park. Fortunately, there was full co-operation from the weather gods on that occasion.

The contrast between the amphitheater at Suan Luang Park and Soi Bangla as a concert venue couldn’t be more stark. The Gazette would like to suggest that the Phuket Provincial Administration Organization continue this culture drive and organize a “Concerts in the Park” series there.

This would be a good way of attracting tourists and promoting the arts among our young people, far too many of whom grow up here viewing performing arts as nothing but an extension of the foreign tourism industry.

Under such influence, it comes as little surprise that so many among Phuket’s youth waste their time manipulating the joysticks of computer games instead of trying to master something more complex and rewarding – a musical instrument.

As an act of goodwill, the visit by a symphony orchestra from a place so far removed geographically and culturally from Phuket was a major success. And, at the risk of appearing presumptuous, the Gazette would like to thank the MSU orchestra on behalf of all the Phuket residents who attended the concerts.