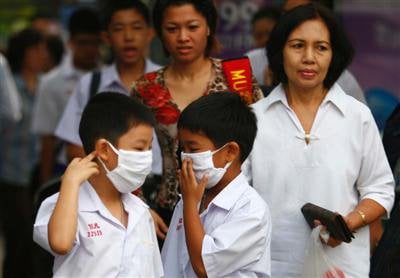 Education Minister Jurin Laksanavisit said that nine schools have suspended classes to prevent spreading of the flu, all in or around Bangkok. Among them are such prestigious schools as St Gabriel’s, St Francis Xavier, Suankularb and Triamudomsuksanomklao.

Any school whose students are found to be infected by the flu can cancel their classes first and then report to the ministry, Mr Jurin said.

Thus far there have been no reports of any infected students or school closures in Phuket.

In its latest update of the global pandemic of Influenza A(H1N1) posted at 11pm yesterday, the World Health Organization reported that 76 countries have officially reported 35,928 cases of infection, with 163 deaths.

These figures represent a mortality rate of less than one half of one percent.

There have still not been any deaths reported in Thailand as a result of infection by A(H1N1).