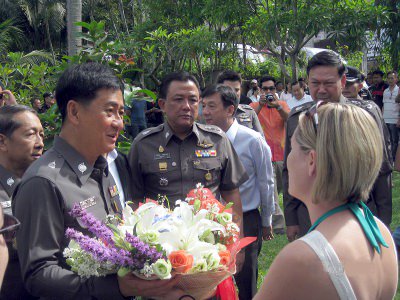 PHUKET: The two men arrested for the fatal stabbing of Australian tourist Michelle Smith were denied police bail yesterday and are now being held at the Phuket Provincial Court holding cells awaiting the formal pressing of charges.

Surasak has confessed to stabbing Mrs Smith, resulting in her death on June 20, and Surin Tadthong has confessed to operating the motorbike used in the bungled bag-snatch that fateful night.

The court granted the police request to incarcerate the suspects in the court’s holding cells for at least 48 hours while police continue to gather evidence.

“This is a sensitive case. I want to be fair to everyone. However, we are not going to allow police bail for the two men.

“We will collect all evidence and complete our investigation as quickly as possible. Hopefully, we can complete everything within 15 days, then we can submit everything to the court and prosecute them,” Phuket Provincial Police Commander Chonasit Wattanavrangkul said.

“The sooner we can close this case, the better it would be for Phuket’s tourism image,” he added.

Commissioner Prewpan received similar thanks from other Australian tourists while he walked the length of Soi Bangla in Patong on Monday night.

Many tourists told him they felt more secure seeing police patrol the streets, especially Soi Bangla, and would like them to do so more often.

During his foot patrol, Pol Gen Prewpan voiced his support for greater use of CCTV in protecting tourists.

“I agree with the idea of adding more CCTV cameras in dangerous and high-risk zones, and not only government organizations installing CCTV around their premises, but also private organizations.

“Setting CCTV cameras in different significant areas is important because when the bad or unexpected happens, the cameras will help police in tracking down the criminals,” he said.

Commissioner Prewpan added that he had ordered authorities in tourist areas to step up measures to better prevent attacks by criminals.

“And not just in Phuket, but in Pattaya and on Koh Samui, too,” he said.