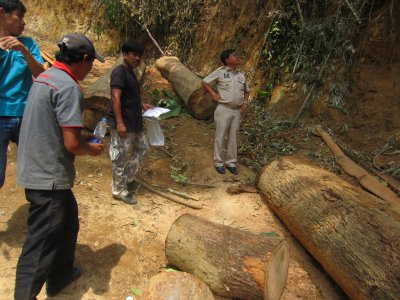 PHUKET: A mass raid on an illegal logging camp on Monday by more than 20 Border Patrol Police officers resulted in 13 felled trees and more than 100 logs being seized.

The raid, led by Phang Nga Governor Thumrong Charoenkul, was instigated by a complaint that illegal logging was being conducted at the hillside site, in Khao Krata Thong, in Phang Nga’s Muang District.

When the officers reached the scene, they found cut logs awaiting collection by the side of the road.

Governor Thumrong, together with Border Patrol Police led by Commander Theerasak Srirachaya, ordered all roads from the site to be sealed off to prevent any attempt to smuggle the timber out.

“We received the complaint from the villagers along with details and photos of the smugglers,” Gov Thumrong said.

“They have been illegally logging [here] for a long time now. We also know that one village chief is involved,” he added.

“I have already told the Forest Department officers to seize all the timber here and for police officers to charge those involved with the maximum penalty,” he added.

However, no arrests have yet been made in the case.

Phuket Immigration to close for holidays