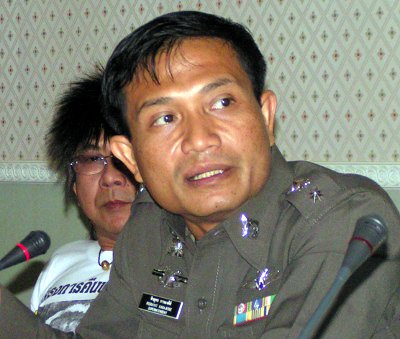 PHUKET: Speed cameras are expected to be installed across Phuket in time for the Thai New Year Songkran festival next month, and nightlife venue operators will be asked to provide transportation home for drunken patrons.

“The budget request for 17 million baht to acquire and install radar speed cameras was approved by Cabinet during their recent visit to Phuket,” said Col Peerayut.

“We are now procuring the equipment and believe it will be installed next month,” he said.

“The cameras will automatically take photographs if a vehicle exceeds the speed limit, and we will send a fine to the registered owner of the vehicle according to the license plate number,” he added.

However, Col Peerayut stressed that the focus of the speed cameras was not on fining drivers, but making Phuket roads safe for everyone.

He also announced that the “Seven Days of Danger” road-safety campaign for Songkran this year will run from April 11 to 17.

“We will be targeting drunk drivers… We also plan to have entertainment businesses provide transportation for patrons who get drunk and should not drive for the sake of everyone’s safety,” Col Peerayut said.

“We will discuss this matter again at the Governor’s ‘Meet the Media’ meeting next week, when we will probably have a Memorandum of Understanding signed concerning the drunk-driving matter,” he added.

Speaking with the Phuket Gazette today, Col Peerayut added, “We have a tentative plan to install an automatic speed camera at the Kho En curve, but we will discuss that in detail later.”

He gave no details of how many speed cameras are to be installed across Phuket, or where they will be installed.