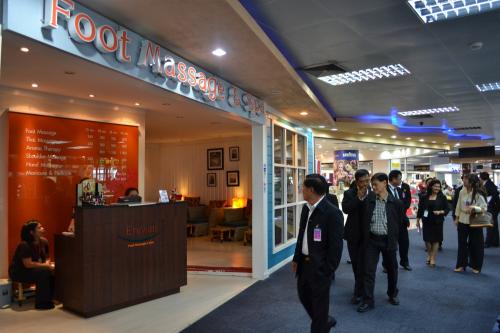 PHUKET: Business operators whose concessions have not been renewed to operate shops and provide services at Phuket International Airport will have the chance to appeal to a top Ministry of Transport official tomorrow.

The news came after Thammawat Wongcharoenyut led nine other airport business operators this morning to file a complaint to Vice Governor Somkiet against Airports of Thailand (AoT), which operates Phuket Airport.

“The business operators argue that they have operated their businesses at the airport for a long time, so they should have the right to renew their concessions, but it’s all down to the AoT board,” V/Gov Somkiet explained.

“AoT has allowed these people to operate at the airport for nine years. However, their most-recent concessions expired at the end of March.

“Now, the AoT board in Bangkok wants to introduce bidding for store spaces at the airport, so the operators’ concessions have not been renewed,” he said.

“I told them that if this is the policy of the AoT board, we then have no authority over them,” he said.

“We have to follow their policy as the airport might want to give the opportunity to other operators to run businesses at the airport,” V/Gov Somkiet said.