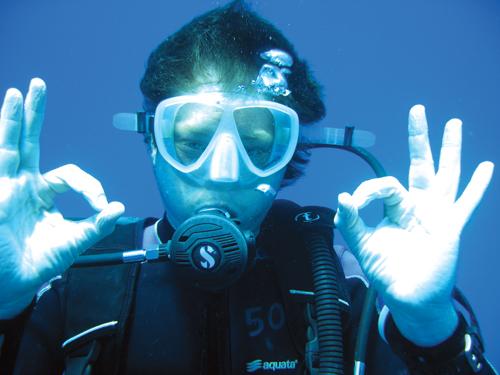 PHUKET: There was an issue before we even boarded the boat. We had been waiting all weekend to photograph the artificial reef at Viking Cave off of Phi Phi Island and weather delays had pushed us back to our last day on the island, and now, looking at the pile of green mucus in my tissue, it was clear there was a problem – I had a cold.

For a BASE jumper, downhill skier, rock climber or sailor, a little congestion is just snot – for a diver it can be the difference between the perfect diving holiday in paradise and having to explain to everyone at the dive club back home that you bailed on the lifetime goal of spotting Manta rays in Thailand.

The fundamental difference between most activities and diving in this sense is equalizing – the need to make the pressure of the air trapped inside our sinuses and air passages the same as the pressure exerted by the water around us. The smallest fraction of difference in that pressure can cause mind-zapping acute pain, known as a squeeze. And pushing too hard to equalize can have serious consequences.

There are people out there, including dive doctors, who have pushed through congestion for a last dive – and it was their last dive. Their mucus blockage turned out to be tougher than their eardrums. As they floated in the water, with fingers pinching their noses, blowing hard to push air through their sinuses into the air space in their ears, they ruptured their eardrums – and finished their diving careers.

The pressure on divers, from dive professionals who pay the bills by being in the water to the once-a-year holiday dive junkies, can be enormous. It can cloud a diver’s judgment.

After shutting the air-conditioner off, I sit in the hot shower, hoping the steam will start to loosen some of the mucus from its moorings deep within my sinus passages. Sadly, the hotel did not have a neti, so no warm salt water snorting solution was on the table.

My dive buddy is banging on the door, worried we will miss our boat.

In no time at all, the boat is bobbing over the dive site. Already suited up, I get the nerve to let my dive buddy and our dive guide know that I might have issues equalizing. This is a big moment. However unlikely, there is no sure way to know if the dive master will call off my dive for my own safety.

Suggesting cures for congestion is taboo among divers because the way we have been trained to deal with it. The reality of how many of us deal with it are at odds with each other.

Because serious issues can arise from equalization problems, the books say: “See a dive doctor to be cleared, or don’t dive”. Despite the the fact that issues relating to the ear, nose and throat are the most common conditions that the Divers Alert Network (DAN) receives calls about, the vast majority of divers seem to be allergic to seeing a dive doctor for “the sniffles”. So many divers, and ashamedly I am one of them, occasionally cast caution to the wind.

Bobbing just one meter below the surface, I gently attempt to equalize, over and over again, as I watch the other divers easily continue their descent to the fish and corals below.

The underwater wonderland doesn’t seem that far away.

“Standing” vertical in the water I breath out and let myself sink 20 centimeters deeper – excruciating pain penetrates my head. It’s too much.

Relaxing, I take a deep breath and ascend a bit. The pain disappears, and I return to gently equalizing.

It is a strange sensation to see what you want, and where you want to go, but to be unable to get there. If there were a wall, a fence or a line of police officers with guns, my mind could wrap itself around the situation. But sitting at one meter, my obstacle was simply an invisible wall of pain just below my fins.

Another descent attempt yielded the familiar, sickly squeak reminiscent of earwax and tiny creaky doors; a few molecules of air had managed to squeeze by the well-fortified mucus barriers and relieve the pressure in my right ear. Then the left ear squeaked. I was almost down to three meters. Gently equalizing, my ears continued to create their own internal cacophony, and I was descending.

Over beers and off the record, dive professionals are a little more willing to tackle the topic of congestion. They know they aren’t supposed to give professional advice, which can open them up to liability, and is best left to dive doctors. However, they also know the territory, and they know it well.

This “insider” information marks the divergence between what some people do and what the book says they should do. These are the bits and pieces that are taboo.

The best trick in the book (on the up and up) is to dive – a lot. The majority of working dive masters and dive instructors spend enough time in the water that their bodies adjust. For some, practice makes perfect, and even with some congestion their nasal passages and sinuses make way. For others, equalizing isn’t perfection, it’s second nature: their bodies simply adjust to the change in pressure.

Most of us don’t have the luxury of spending so much time in the water. Though a salt water neti can help, many turn to decongestants. If having congestion is the problem, something that removes the congestion seems a logical answer.

Many people turn to Actified as a decongestant of choice – sticking to the 12 hour stuff as a precaution to it wearing off mid-dive. They take it about 30 minutes before a dive, and go for it. There are still risks, but they are risks they understand and are willing to except.

Descending at the rate of phytoplankton, I was regretting not having taken a decongestant.

Finally at the sea bottom, there is a pit in my stomach as I watch our dive team follow the slowly sloping sands deeper. Not willing to push further, I float several meters above the group jealously playing with their bubbles as they photograph and explore the lower concrete blocks of the artificial reef.

Back on the surface, I was safe. The necessary photos were captured, but it hadn’t been a fun dive by any stretch of the imagination. On the boat, stripping off my gear with the warm tropical sun beating down on me, it was hard to imagine what would have been so bad about skipping the dive and working on a tan.

Keep checking our Phuket Lifestyle pages for the latest features from across the island, join our Facebook fan page or follow us at @PhuketGazette.

It’s all in the game – Phuket TECH