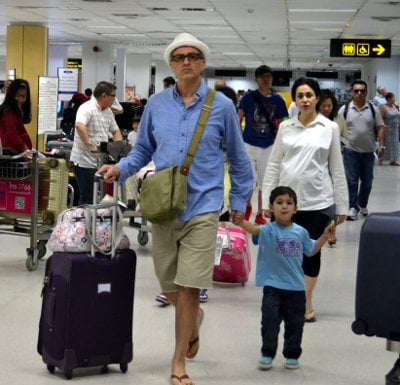 PHUKET: A high-level board delegation representing Airports of Thailand Public Company Limited (AOT), including six directors of major airports in Thailand, met yesterday at Phuket International Airport to discuss strategies to place Thailand in the top 10 of Asia’s aviation hubs.

In line with AOT’s aspirations for Thailand to become a regional aviation hub, the current expansion planned project to expand Phuket International Airport was also discussed.

On completion that will increase the airport’s passenger handling capability from 6.5 million to 12.5 million tourists per year.

Transport Minister Jarupong Ruangsuwan, who in May last year was installed as the Pheu Thai Party Secretary-General, yesterday presented his idea of expanding Bangkok’s Suvarnabhumi Airport by acquiring another 30,000 rai of land on which to build a third and fourth runway.

This would increase the area of Suvarnabhumi Airport to 50,000 rai, needed to make the airport the “world-class standard”, he said.

This, however, would be scrutinized before a public hearing, he added.

Mr Jarupong suggested that land not directly used in the expansion project could be put to other uses such as an exhibition/conference center or shopping mall, or even a Formula One racing circuit.

“To become a regional aviation hub, we have to develop in many ways. We should start by giving our ‘guests’ a more comfortable experience,” said Mr Jarupong.

“Transportation to and from Suvarnabhumi to Bangkok by rail, bus and taxi or limousine needs to be thought through, as do the airport’s immigration processes,” he said.

“Also the restrooms need to be of a higher standard than they are,” he added.

The minister also raised concerns over aircraft passenger boarding and disembarking times, especially considering the rising popularity of the Airbus A380s, which carry more than 500 passengers at a time.

“I am concerned about A380s as recently it has been taking between 30 minutes to an hour and a half for all passengers to disembark,” he said.

“We have to expand facilities to properly accommodate A380s, especially as they will soon be coming into service with Thai Airways and other airlines,” he said.