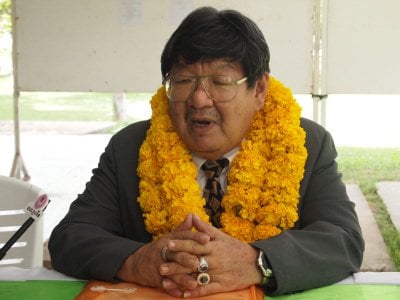 PHUKET: Registration closed yesterday for candidates to enter the April 7 Phuket Provincial Administration Organization (OrBorJor) presidential election, with a second candidate entering the race and another withdrawing on the grounds that the election was “unfair”.

Chayot Wisartpong from Pa Khlok, arrived at Phuket Community Hall with his supporters to register with the Phuket Election Commission shortly after 3pm.

Mr Chayot has been a teacher in Phuket, a Master of Ceremonies at events and an OrBorJor adviser from May 2011 to February 2012.

He admitted that this was going to be a very short campaign, but said he knew the right people and technology to make it happen.

“I believe in democracy. I was paying close attention to the election since the first day of enrollment. Up until the last day no one apart from candidate number one [former OrBorJor President Paiboon Upatising] had enrolled so I decided to register as a candidate,” he told the Phuket Gazette.

“I have always been ready to sacrifice myself to public service and I believe I am trusted by the public,” he added.

Concerning the issues he believes need addressing in Phuket, Mr Chayot said, “The first problem that needs to be fixed is the traffic. The next thing is the lack of educational facilities. Education is not being supported as it should be.

“The voice of the people is also very important. I will involve everyone in my work, especially religious people. This is important, because religion encourages people to act positively,” he added.

On how he will conduct his campaign given such a short time before the polls open Mr Chayot believed that canvasing door to door was not a viable option.

“I will use technology to help, especially the telephone,” he said.

One person who has spared himself the frantic political maneuvering was long-term Phuket political player Wisut Santikul.

The former OrBorJor Deputy President and MP candidate, changed his mind at the last minute.

Mr Wisut arrived at the hall at 9am yesterday armed with the required enrollment documents, but elected not to submit his application for candidacy.

“I am sorry for everyone that I did not enroll, but I am thankful to all my supporters. I wish I could have been a candidate in a fair field,” he said.

“I think it is unfair to ask other candidates to run a campaign in 20 days. How can I canvas 200,000 people in that time?” asked Mr Wisut.

“If I enrolled I would not belong to any political party. I would be standing as an independent,” he said.

Mr Wisut plans to wait until what he sees as a better opportunity to contest the OrBorJor presidency and believes that local government administrations could learn lessons from how this election has been “mishandled”.

“I am not afraid of defeat. I have failed many times before. As I said I see this [election] as not fair,” he said.

“I was the OrBorJor deputy president for eight years and I see nothing has improved. In the past we obtained an annual budget of 400 million baht, which has now grown to one billion baht – but the same problems still exist. For starters, the traffic problems should have been fixed,” said Mr Wisut.

“Besides that, finding a Phuket FC sponsor, tourism issues and the OrBorJor hospital are all matters I would have sorted out if I were the president,” he added.