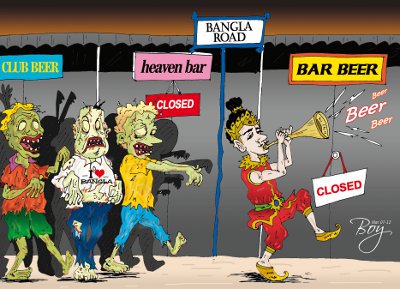 PHUKET: It would be difficult to find a country anywhere in the world that has a wider gap than Thailand in terms of its alcohol control laws and their actual enforcement – and no other province suffers as much as Phuket because of it.

The Phuket Gazette knows that alcohol use is often associated with fatal and debilitating accidents, violence, preventable diseases and countless acts of unseemly behavior. Anyone who has ever wandered sober along Bangla Road at 3am and seen the cumulative effect would probably be surprised that the number of violent confrontations and other mishaps is not much higher than it actually is.

The past few weeks alone have seen reports of a murder triggered by angry reaction to noise produced by drunken neighbors in Chalong and, nationally, allegations that a very high ranking government official was drunk on the floor of Parliament.

Given the spirit of the 2008 Alcohol Control Act, these allegations should have raised the question of whether ministerial regulations need to be amended to ensure that our representatives are sober while working for us. But, not surprisingly, given the “influence” of the individual involved, no potentially corrective action has been taken.

Despite the steady stream of high-profile cases that keep the dangers of alcohol abuse in the media spotlight, it is best to keep in mind that for the overwhelming majority of drinkers, the main penalty for overindulgence is a hangover – nature’s built-in payback that has done more to curb excessive consumption than the unenforceable and draconian terms of the Alcohol Control Act ever could.

In stark contrast to the terms and spirit of the Act is the situation on the ground in Phuket, where the vast majority of the millions of foreign visitors annually want, and expect, to imbibe alcoholic products during their stays.

Those arriving over the weekend of April 7 will be disappointed, as the sale of alcohol will be banned as they land for a holiday in paradise, ostensibly to ensure that residents vote in the upcoming Phuket Provincial Administration Organization (OrBorJor) election.

Why wouldn’t officials consider amending the Election Law so that areas already recognized by the government and designated as special entertainment zones, such as Soi Bangla, are exempted from the ban?

The police can still conduct their sweeps in such areas to ensure that eligible voters are not breaking the law, while the tourists and other foreigners – who are all not eligible to vote anyway – are left to enjoy their holiday.

Given the fact that Patong residents somehow manage to conduct fairly normal day-to-day lives despite all the drunken excesses that surround them, we are confident that they would still find their way to the Sunday polls even if bars in the entertainment zone were allowed to remain open the night before the polls.

Phuket Opinion: Phuket land probes “a plus’ for Phuket

Phuket Opinion: There’s an Elephant in the Room