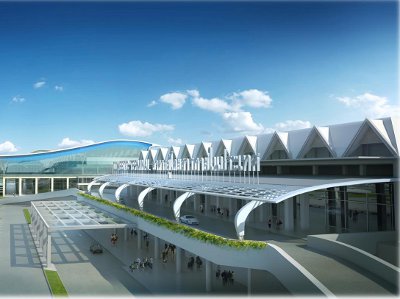 Mr Pratheep was joined at a press conference at the Royal Phuket City Hotel by Phuket Airport Director Prathuang Sornkham, who said that the expansion project would not adversely affect passengers, as construction traffic would use a separate access point.

Mr Prathuang also reassured the audience that airport security would be maintained throughout the construction.

“To protect against sabotage, we have implemented “level 3″ security measures, which include random checks of vehicles entering the airport or construction site,” he said.

Mr Prathuang went on to address the ominous topic of taxi and bus transportation facilities at the new, improved airport.

“Right now, as the project is starting, taxi management at the airport is run from an office beside the building. During construction, it will not descend into the chaos it was before, with taxi drivers trying to grab passengers just stepping out from the airport exit. The taxi operators will be at their own counters and the lanes outside arrivals will be for pick-up only,” he said.

As an aside, Mr Prathuang touched on the matter of the current taxi concessions. “The taxi companies are asking for a reduction in the fees, but this is a business and they accepted the terms and conditions when they signed their contract with us.

“If we reduce the fees [for the companies currently holding the concessions], how will other companies who also bid for the contract react? They’d probably lodge a complaint,” he said.

Ending the subject, Mr Prathuang said that once the new building was finished, the various taxi, bus and car parking zones would be decided and clearly marked.

The new airport will increase the number of parking spaces from 500, to 1,500.

Looking at the bigger picture, the 5.7-billion-baht airport expansion will increase the number of both international and domestic passengers the facility was designed to handle from the current 6.5 million to 12.5mn per year. The current limit has already been surpassed, with 8.4mn transiting through the airport last year. That figure is projected to increase by 11 per cent to 9.3mn by the end of this year.

While the number of flights in and out of the airport will remain unchanged at 20 per hour, the expansion will see the addition of 10 more aircraft bays, bringing the number to 25, and another four passenger boarding gantries, to a total of 11.

One disappointment for the director was the lack of space to include a special handling area for arriving and departing small VIP jet aircraft.

“We would like to have a jet terminal facility [to handle important passengers], but with the limited land available it can’t be built,” he said.

Click on the following links to see artists’ impressions of what Phuket Airport will look like once the expansion is complete: