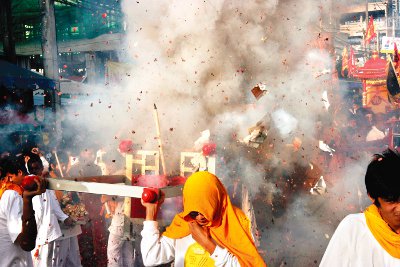 PHUKET: Phuket Governor Tri Augkaradacha has expressed his concern over the overzealous use of firecrackers and the skyrocketing prices of vegetables during the upcoming Phuket Vegetarian Festival, this year to be held from October 15-23.

The news came at a meeting between Governor Tri and other senior officials and the Phuket Vegetarian Festival committee at Phuket Provincial Hall yesterday.

Among those present at the meeting were Phuket Culture Office Chief Thawichart Intararit as well as representatives from Chinese shrines across Phuket, including Prasert Fakthongphol.

Mr Prasert is the president of the Phuket Shrine Society and president of the Theprasri Association, which administers Bang Neaw Shrine, one of the main shrines that takes part of the annual festival.

“I will reiterate to the relevant organizations to control the use of firecrackers and food prices, to ensure that the streets remain clean and that the safety of tourists is preserved throughout the festival,” Governor Tri said.

He explained that he wanted the use of firecrackers controlled and a strict adherence to regulated food prices.

“Some food vendors might raise their prices during the festival just to take the advantage of tourists,” he said.

The governor added that the Phuket Provincial Administration Organization (PPAO) had agreed to assist festival organizers by helping to manage traffic in areas affected by the street processions and by boosting security on the streets during the festivities.

“I have also arranged for medical units staffed by doctors and health officers to be on standby in different areas across the island for any emergency that might happen during the festival,” he said.

Governor Tri noted that, in addition to the usual festivities, this year there will be a special street procession to honor HM King Bhumipol Adulyadej, HM Queen Sirikit and HRH Crown Prince Maha Vajiralongkorn.

The procession will be held on October 16, starting at 4 pm Sanam Chai field opposite Provincial Hall in Phuket Town.

Landslide win for Phuket’s Pian Keesin – the Mayor of Patong