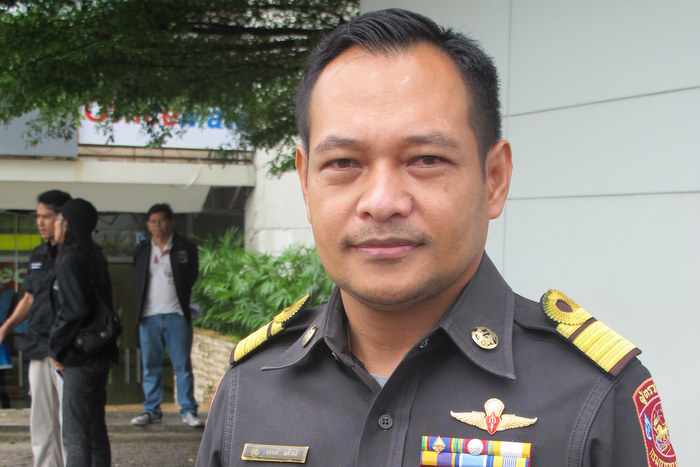 PHUKET: The chief official in charge of drafting key policy changes affecting Phuket’s public transport has revealed that he will present a request for an airport bus operator to hire van drivers to deliver tourists from Phuket International Airport directly to the taxi-mafia hotbed of Kata-Karon.

Jaturong Kaewkasi, the chief policy adviser at the Phuket Land Transport Office, confirmed to the Phuket Gazette that he will propose the idea to Phuket Vice Governor Chamroen Tipayapongtada, who heads the Phuket Provincial Land Transportation Committee, as soon as possible.

“I have been in talks with Prakob Panyawai, the owner of the company that operates the Airport Express Bus service, about extending the bus service to Kata-Karon,” said Mr Jaturong.

“We would like to extend the service as soon as possible.”

Mr Prakob first revealed to the Gazette that Phuket might finally be able to provide a bus service between Phuket International Airport and Kata-Katon on June 11 (story here).

Though the airport bus was initially planned to serve Kata-Karon (story here), fear of violent reprisals from local tuk-tuk and taxi drivers necessitated scaling back the route to terminate in Patong.

The only problem Mr Jaturong and Mr Prakob foresee in the immediate future, now that many of the threatening figures have been removed and Phuket Governor Maitri Inthusut has pledged his full support for the buses to serve Kata-Karon (story here), is tourism low-season demand.

“It might not be cost-effective to use the big bus on the final legs of the bus route, so I will propose to Vice Governor Chamroen to allow vans to take passengers from the airport to Kata-Karon,” explained Mr Jaturong.

The drivers will be full-time employees of the bus company, and the vans used will be owned by Mr Prakob, Mr Jaturong added.

“Under the terms proposed, the van service cannot be subcontracted to a third party, and of course all drivers must have no criminal record,” he explained.

“There will be no extra fee for tourists to pay. Any passengers who board the vans will be required to pay only the regular bus fare to be ferried between the airport and any other stops on the hop-on hop-off route to Kata-Karon.”

Mr Prakob is keen to get the vans rolling.

“This way, we can launch a public transport service to Kata-Karon. It will save people a lot of money, and we will be able to continue our service,” he told the Gazette.

“We will launch the service as soon as I have permission. The buses and vans to Karon are ready to roll..”