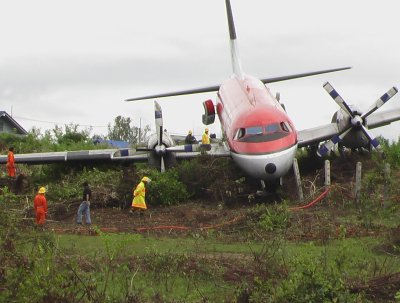 BANGKOK: Phuket Air has canceled its services between Bangkok and Mae Sot, and Bangkok and Buri Ram, after one of its aircrft skidded off the runway at Tak Airport while landing the day before yesterday. None of the 30 passengers on board was injured.

The decades-old Japanese YS-11 twin-turboprop aircraft, which can carry 64 passengers, barreled into the airport’s perimeter fence, damaging the starboard wing and propeller. The airline has now withdrawn its four YS-11s from service and canceled the two domestic routes.

Immediately after the aircraft came to a halt, the two pilots reportedly broke a cockpit window and jumped out, before rushing back to open the doors so passengers and cabin crew could get out.

Capt Chawanit Chiamcharoenvut, Executive Vice-President of Phuket Air, said, “The rain might have affected the plane’s braking system. The aircraft stopped 10 meters farther from where it should have stopped.”

Senator Udon Tantisunthorn, who was on board the flight, disagreed. He said, “If you ask me, the plane should have touched down at the beginning of the runway rather than around the middle.”

Tak Airport Chief Prongsak Phanmit said experts from the Thai Department of Aviation will investigate the cause of the accident.

Capt Chawanit today denied press reports that the licenses of the two pilots involved had been suspended.

“The pilots are expected to remain flying until after the investigation process is complete,” he told the Gazette.

But at the same time he confirmed that none of the carrier’s YS-11 aircraft is now in use, and also said that Phuket Air “finally decided to cancel Bangkok-Mae Sot and Bangkok-Buri Ram operations from September 12”, citing financial losses.