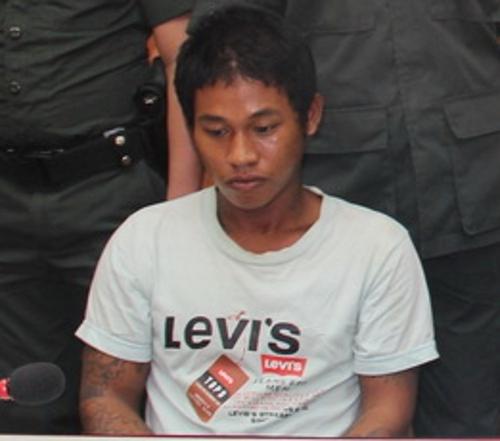 PHUKET: A man nabbed by police for snatching a Frenchwoman’s bag on Tuesday confessed to having also robbed a Phuket 7-Eleven with a scythe multiple times this year.

The suspect, Winai Soimuea, 26, was presented to the press at Phuket City Police Station in Phuket Town on Tuesday.

Police stopped Mr Winai as he rode away from the scene of the bag snatch, at the T-junction near the temple.

“Police stopped him as he and the motorbike he was riding matched the description given by the 20-year-old Frenchwoman whose bag was stolen,” Gen Choti said.

During questioning by police, Mr Winai reportedly confessed not only to multiple bag snatchings and thefts of tourists’ belongings in many areas of Phuket, but also to having robbed a 7-Eleven in Thalang with a scythe on three separate occasions.

Police took Mr Winai to the construction camp at Baan Bangjo in Thalang, where he lived. There they arrested his alleged accomplice, Ua-angkul Komsom, 18.

Among the numerous offenses cited, Mr Winai also confessed to two specific thefts in Phuket Town and another in Chalong, as well as stealing a motorbike in Chalong, Gen Choti said.