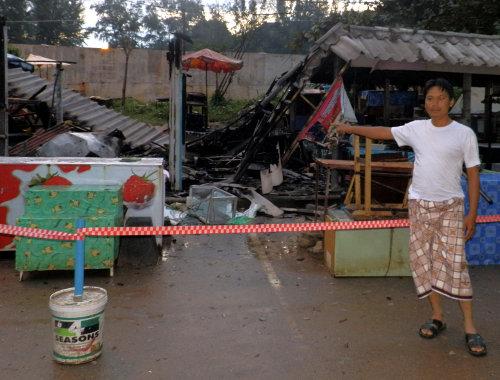 PHUKET: A fire engulfed a small beachfront minimart at Surin Beach and spread to four other shops early this morning.

Mr Man told the Phuket Gazette that he opened his store little over a year ago, but this was the second time his shop had caught afire.

“I believe it was set on fire, as this is the second time it has happened already. The first time there wasn’t much damage, but this time the whole shop has been destroyed,” he said.

Cherng Talay Administration Organization firefighters were able to squelch the flames in about a half hour, said Cherng Talay Police Sub Lt Jirasak Sungwisut, who received the initial report at about 5:15am.

“We have yet to determine whether arson or an electrical short caused the fire. We will keep people out of the area until the fire-investigation squad has inspected the scene,” Sub Lt Jirasak said.

However, the fires have not been the only alleged attacks on Mr Man’s family at the beach.

Maiwadee Thonglor, Mr Man’s 25-year-old sister, was beaten unconscious in broad daylight allegedly for selling fruit in front of her attacker’s restaurant on the beach in January 2011.

The incident sparked an official inquest, resulting in Tri Augkaradacha, the Phuket Governor at the time, ordering that businesses be “blacklisted” if acts of intimidation were proved true.