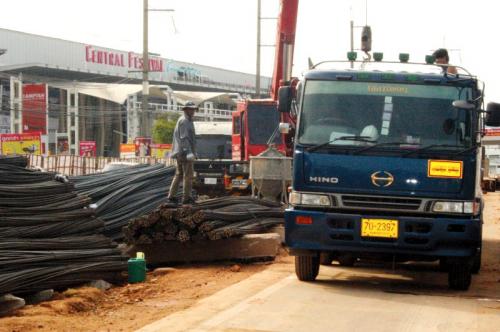 The government continues to pour money into Phuket’s infrastructure, as nothing seems to hamper the rapid growth of the island as a tourist destination. Billions of baht have been spent, but when will the results be felt? Stephen Fein reports.

PHUKET: While Phuket Airport remains the single largest bottleneck for foreign arrivals, the island also continues to suffer from numerous other infrastructure needs due to the ever-increasing expansion that has seen it emerge as a premier resort-island destination in Asia. The island accounts for more than 10% of the country’s international tourism revenue, by official estimates.

Nowhere is the infrastructure problem more obvious than on the roadways, with traffic congestion reaching previously inconceivable levels in 2012, as a result of increasing vehicle numbers and an almost complete lack of reasonably-priced, tourist-friendly transport options.

While several large construction conglomerates from East Asia have expressed interest in building a light-rail project on the island, some even conducting their own feasibility studies on the issue, the Transport Ministry in June said only the Thai government was authorized to do such studies. The Ministry will begin its own feasibility study into a rail link from Phuket and Surat Thani “near the end of the year”. The study, approved during a mobile Cabinet meeting in March, is expected to take 14 months to complete.

One section of the main artery to Patong from the west, Phra Barami Road on “Mt Mayhem”, managed to escape complete collapse during last rainy season, but budgetary problems have meant that emergency repairs can only begin next March – at the earliest.

Despite ever-increasing talk of “disaster prevention and mitigation”, no regular monitoring of the most perilous section of the road has been observed. Other sections of the same road that have also suffered slumps or sinkholes in the past and are in need of shoring up.

Thus, Highways Department officials can only hope that early 2013 does not bring the same severe torrential downpours that caused widespread flooding and landslides on the island early in 2012.

THE Highways Department in May 2012 completed public hearings into construction of another underpass using a similar design at Bang Khu Intersection in Koh Kaew. Although no start date has been announced, the department said in May that the 450-million-baht project would “definitely move forward” under its 10-year-plan, which also includes an underpass at Samkong Intersection on the bypass road.

In November, work got underway on a 600mn baht underpass at intersection adjacent to Central Festival Phuket, reducing traffic flow to just two lanes in both directions on the bypass road. The project contract calls for completion within two years.

THE Phuket Provincial Office also in November signed a Memorandum of Understanding with the three legally-operating taxi services at Phuket Airport that will allow them to add a total of 135 new vehicles to the airport taxi fleet.

The agreement effectively legalized taxis that had been operating there illegally as part of the Mook Andaman (“Andaman Pearl”) taxi driver co-operative. The decision came just one month after Airports of Thailand (AoT) announced a freeze on the number of taxis allowed to operate at the airport. The MoU was signed by airport director Pratuang Sornkham.

THE opening of the controversial Phuket Bus Terminal 2 in Rassada in April, some 28 months after its construction was completed, marked another development in Phuket’s public transport. However, the facility was quickly monopolized by taxi and tour operators, who offer standard fares to popular tourist destinations.

The Phuket Provincial Administration Organization, which declined to take over operation of the facility, added a new “Pink Bus” route to shuttle passengers arriving there into Phuket Town. However, the route has proved too difficult for most non-Thais to master, apart from the scores of Burmese living in Rassada who have greatly benefited from the service.

On the topic of the island’s infamous “black plate” taxi syndicates, the improvements in 2012 were largely cosmetic. The Phuket Provincial Office, under constant pressure from the international diplomatic community and tourism associations, in October announced that all illegal taxis would need to be “stickered” and in the process of becoming legal, green-plated taxis by November 1, after which time the amnesty would end and a crackdown would ensue. At that time they estimated the number of black-plate taxis at almost 3,000, dispersed at 186 taxi ranks across the island.

One black-plate taxi driver told the Phuket Gazette the stickering had led to windfall profits in the short-term, as his SUV could now clearly be marked as a taxi – something he had never dared do before. The ultimate success of the initiative will likely come next year, as it will take 180 days for owners to complete the registration process.

A Gazette online poll on the topic conducted late in the year found that a clear majority of readers wanted authorities to be strict in bringing illegal taxis into compliance with the law.

ANOTHER major infrastructure “development” was the government of Prime Minister Yingluck Shinawatra shelving the plan to build a 2.6-billion-baht international convention center in Mai Khao. Possible impact on sea turtle nesting sites in the area was given as one of the reasons the project failed to pass the environmental impact assessment (EIA) approval process.

One project that did get the green light, at least on paper, was the plan to bore a tunnel under Patong Hill, connecting Kathu and Patong. The Expressway Authority of Thailand (EXAT), the agency tasked with conducting a feasibility study, in August announced the project could be completed by 2018 if budget approval is granted in 2013.

A study undertaken in November 2011 projected the amount required from the central government at 3.5 billion baht. The figure being considered in March 2012 was 5.5bn baht, jumping to 6bn baht by June.

ONE major infrastructure development during 2012 was the completion of the new 960-million-baht solid waste incinerator at Saphan Hin, which after a few glitches became fully operational around mid-year.

Despite its ability to burn 700 tonnes of trash daily, officials say it is no match for the ever-increasing volume of garbage that arrives there every day. Thus, the surrounding landfill remains “at full capacity” while they seek an additional budgets to increase landfill capacity and repair the old incinerator in order to “back burn” all the waste in the landfill.

Finally, plans for a 100mn baht expansion of the Phuket Deep Sea Port in Wichit remain on hold due to opposition from local residents in the EIA public hearing process. The expansion is needed to accommodate more cruise ships to Phuket, the company that runs the port on a concession arrangement said.

Representatives of several large cruise ship companies visited the island over the past year to urge the government to improve facilities, saying there was a high demand to include Phuket as a port-of-call.

ALTHOUGH the final figures have yet to be released, 2012 appears poised to be yet another banner year for the Phuket tourism industry.

Passengers transiting through Phuket International Airport surpassed the record number of 8.4 million in 2011 and were expected to reach well over nine million by the end of 2012, with analysts anti