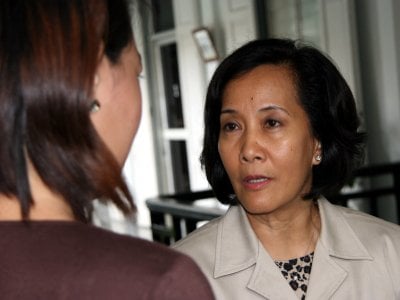 At the top of the agenda was promoting the cross-flow of tourists between the Philippines and Phuket.

“This is the one area that I am looking into. We both can learn from each other in the tourism business and service, so we can encourage tourists from Phuket to visit the Philippines and tourists visiting the Philippines to come to Phuket,” she said.

Ambassador Lacanlale took up the three-year posting as Ambassador to Thailand on arriving in the kingdom on June 1.

She arrived direct from Vienna, where she served as the Philippine Ambassador to Austria and non-resident Ambassador to Slovakia, Slovenia, and Croatia.

At the Governor’s Office at Provincial Hall, Ambassador Lacanlale told the press her visit to Phuket was to establish good relations with high-ranking authorities in the province and to promote goodwill between the countries.

To that end, she said the Philippines Embassy would cooperate fully with the governor in providing any information about Filipinos asked for.

There are currently about 2,000 Filipinos living in Phuket. Most of them work as English-language teachers, singers or musicians.

During the lighter conversation, Governor Wichai asked the ambassador to pass on his congratulations to Manny Pacquiao, the famous boxer, for being elected to Filipino Congress as the member for the southern district of Sarangani, on Mindanao.

“I know that Governor Wichai is very busy, but he was able to meet me even for a short time. I appreciate that,” she said.

In the next two weeks, Ambassador Linglingay will visit Udon Thani province and meet local officials there.

No sex, but lots of vegetables in Phuket next month