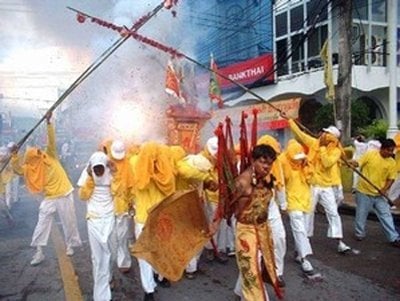 PHUKET: Skewered and entranced maa song (‘spirit mediums’, or ‘devotees’) will again embody the gods for next month’s Vegetarian Festival in Phuket.

For most local celebrants the festival means nine days of abstention from sex and alcohol, and rigid adherence to a vegetarian diet.

Mind-blowing processions, ear-splitting firecrackers, traffic jams, peaceful chants and vegetarian food return to Phuket to reveal an enigmatic side of the resort island during this landmark event.

Arguably among Phuket’s top five annual events in terms of fame, the festival will take place from October 8 to 16 in the Old Town, where the Chinese-speaking households fly yellow flags.

More than 150 years old and celebrated primarily by the local Chinese community, the festival showcases Phuket’s mystical side.

Each morning begins with processions through the town. At dawn, one can find scores of young men thronging the inner sanctums of the temples, preparing themselves for self-mutilation.

After going into a trance, these maa song manifest supernatural powers and perform self-mutilation so they can absorb evil from other individuals and ensure good luck for their fellow Phuket residents.

Foreign tourists are often shocked by the mutilation, but local beholders see it as an honorable sacrifice for the benefit of the entire community.

Possessed by the spirits of nine deities, the ascetic maa song apparently feel no pain and show little sign of real injury.

For more details about this holy event, visit PhuketVegetarian.com.

Tsunami drill in Phuket this month