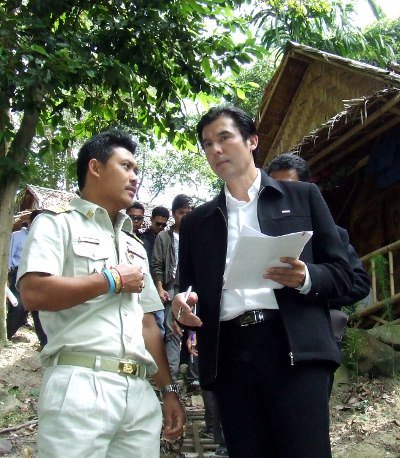 PHUKET: Government Spokesman Prompong Nopparit has confirmed to the Phuket Gazette that the investigation into two land titles being illegally issued for 65 rai at Phuket’s pristine Freedom Beach has now been handed over to the Land Department and the National Anti-Corruption Commission (NACC) for further action.

Speaking to the Gazette yesterday, Mr Prompong also confirmed that the Parliamentary Committee for Anti-Corruption and Misconduct had deemed that the two titles deeds in question were found to have been issued illegally.

“The committee has investigated the Freedom Beach complaint and found that those two land titles were issued illegally. The case has been sent to the National Anti-Corruption Commission [NACC] and to the Land Department for further action.

Mr Prompong explained that the Land Department will set up its own committee to investigate the case.

“If their investigators also find that the land titles were illegally issued, then the Land Department will revoke the title deeds,” he said.

The parliamentary probe headed by Mr Prompong also found that at least 13 officials were involved in illegally issuing land titles.

“How long the officers involved in this incident have been conducting illegal actions will be determined by the Land Department in their investigation.

“Regardless, the parliamentary anti-corruption commission has determined in its inquiry that these two land title deeds are not legal,” said Mr Prompong.

“Anuwat Meteewiboonwut, the director-general of the Thai Land Department, has given his word that he will take action against anyone found to be involved in this case.

“If he doesn’t do anything about this, he will be found derelict in his duty and removed from his position,” said Mr Prompong.

The Pheu Thai MP added that he did not blame the parties attempting to buy the land, for about Bt4 billion, for any impropriety.

“In my opinion, those who bought the land are not the guilty parties. Instead, it is officers involved in illegally issuing the land titles, which includes officers from the Land Department, the Forest Department and the Ministry of Natural Resources and Environment,” he said.

Mr Prompong urged anyone wanting to buy land to have the relevant land documents checked – and verified – carefully. “Especially hillside land and land on a slope of 35 degrees or more. Otherwise there might be a problem like Freedom Beach,” he said.