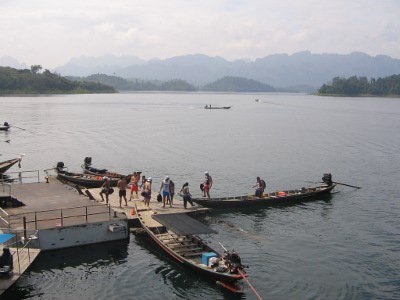 “The body of Cheng Hway Shyu, 46, is being kept at Surat Thani Hospital, while the boat driver, Atipong Wichiankaew, 24, remains in hospital. He has yet to regain consciousness,” Col Jarun said.

“Mr Shyu came with about six Taiwanese friends and stayed at a floating resort in the park. Yesterday, they went out on the lake on a big boat, then divided into groups to tour the reservoir on four small longtail boats. The small boats cannot carry more than three people,” he explained.

Mr Shyu’s friends and the other longtail boatmen launched a search for the missing pair after they failed to arrive for a lunch rendezvous.

They found Mr Atipong floating in the water near his boat, but found no trace of Mr Shyu.

“They rushed Mr Atipong to Takhun Hospital. From there, he was transferred to Surat Thani Hospital,” Col Jarun said,

Rescue workers returned with dive gear and started to search for Mr Shyu’s body in the lake, which has a max depth of about 50 meters, he said.

Col Jarun said the boat showed no sign of damage.

“There was a tree sticking out of the water near where the accident happened, but we cannot tell whether or not the boat hit it. I examined the boat this morning, and there were no signs of damage,” he said.

“We are waiting to Mr Atipong to regain consciousness so he can tell us exactly what happened,” he added.

“At this stage, I believe the boat might have passed too close to the tree and both men may have been struck as they passed by.

“The boat is very small, less than a meter wide. It is probable that the tree struck them in the head and they both fell into the water,” Col Jarun speculated.

“Minute man’ robber makes off with B19k at gunpoint