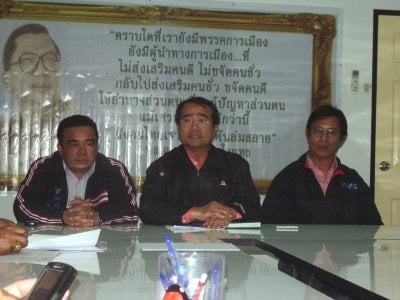 PHUKET: A regional spokesman for the opposition Pheu Thai Party was in Phuket yesterday to promote the party’s plan for national reconciliation.

Chaturont Kochasiha addressed an audience of party coordinators and the media at the new Pheu Thai ‘Andaman Operations Center’ in the Phuket City Home estate in Rassada.

Mr Chaturont said he had come to the island to help party members understand the party’s strategy to achieve national reconciliation.

“Reconciliation is not just between the Pheu Thai and Democrat parties. Everyone in society must help each other to achieve peace,” he said.

Mr Chaturont said that everyone would benefit from reconciliation, but cautioned that it must be achieved according to the rule of law.

“Both parties must be sincere with each other if we are looking for reconciliation and fellowship to happen,” he said.

The Phuket-based Andaman operations center, which opened June 24 this year, is one of three regional centers intended to coordinate the party’s election campaign for the Southern region.

The party will use the centers to coordinate with party headquarters in Bangkok, canvas the opinions of party members in the regions and offer general support to the political work of Pheu Thai members.

The party has a lot of work to do if it is to gain support in the South, however.

“We understand that the Southern region is the base of the Democrat Party and we admit we have failed to connect with the people here. We plan to do more promotion so people understand our policies better,” Mr Chaturont said.

“Our candidates will be selected from locals who really understand the needs of the people, not just from whoever happens to be powerful,” he added.

Mr Chaturnont said the Phuket operation center was open for visits from the general public, not just party members.

“It’s for everyone who’s interested in democracy and wants to learn more about it,” he said.

“We opened this center for reconciliation, not to argue,” he said. “In the eyes of outsiders Phuket is a wealthy province, but in reality people are suffering from the weak economy. We want a Phuket without conflict to boost development.”

At Pheu Thai national headquarters on September 2, deputy leader Plodprasob Surawadi issued a statement seeking talks with the government to end the political conflict which culminated in 10 weeks of anti-government red-shirt protests earlier this year.