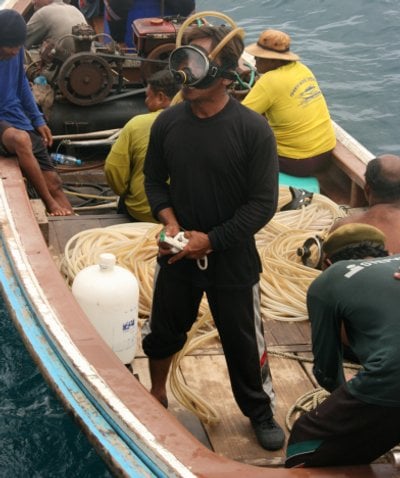 PHUKET: Efforts to salvage the sunken Choke Thaworn 6 and its cargo of some 25,000 liters of diesel fuel remain on hold today due to big waves and strong currents.

Members of the media were yesterday taken aboard a Department of Marine and Coastal Resources (DMCR) vessel to the site, 12 nautical miles off Phuket’s southwest coast.

At the site were three sister ships of the sunken vessel and a complement of sea gypsy divers from the Laem Tukkae community on Koh Sireh in Rassada, who have been hired to conduct the salvage operation.

Head diver Surin Pramongkit told the press on Wednesday that his team had yet to rig up any of the 50 steel drums needed to be attached to the sunken vessel as part of the salvage mission.

Once all of the drums are attached, they will be filled with air, the buoyancy from which should raise the vessel from its current position 43 meters below the surface, he said.

Efforts at the site thus far have only achieved tying rope to the sunken boat and other preparatory work. All fifty 200-liter steel oil drums remain on the deck of Choke Taworn 7.

Working from a single longtail boat with an air compressor, the sea gypsies use air pumped down through a hose from the surface rather than scuba gear. The method, which they also use for walking along the seabed to collect marine species, has drawn much complaint from the local recreational diving community in the past.

The darkness at 43 meters makes the work difficult and only three divers can go down with one drum at a time, he said.

The team stopped work at about 4pm Wednesday and it has not since resumed.

Mr Surin told the Gazette this afternoon that offshore currents and wave activity were too strong to continue the operation today and that he was monitoring the weather and sea conditions closely, waiting for another chance.

He failed to give an estimate as to when the mission would be completed, but guaranteed eventual success.

He has already been involved in 40 successful boat salvage efforts using this technique, he said.

On Wednesday the two vessels monitored the work from a position of about one kilometer away. The vessels are equipped with sorbent booms and chemical dispersant in case any of the submerged tanks leak during the salvage operation.

HTMS Man Nok also has a team of expert Navy Seal divers aboard, but they are not involved in the salvage effort.