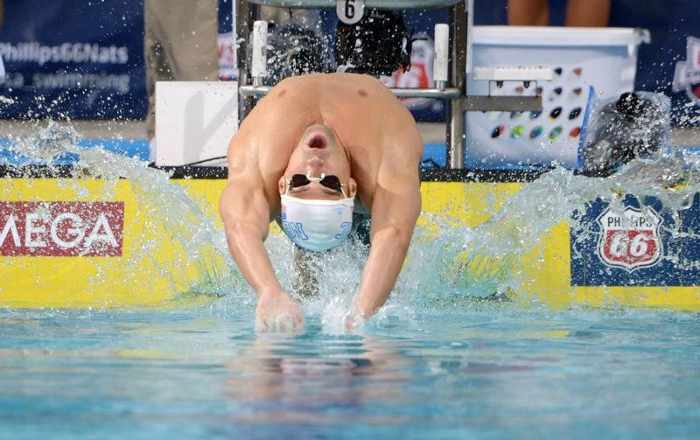 PHUKET: Michael Phelps made an ominous return to international competition on Friday, qualifying for the final of the 100 metres freestyle at the Pan Pacific championships at Australia’s Gold Coast.

Taking on the world’s best sprinters in an event he rarely competed in even at his peak, Phelps won his heat and touched the wall in 48.45 seconds.

His time was third fastest overall, just behind the reigning Olympic champion Nathan Adrian (48.05) and the two-time world champion James Magnussen (48.25), but was still the talk of the pool deck on a rainy morning.

Still in the early stages of his comeback after he retired following the 2012 London Olympics, Phelps has struggled to get back to his best and pulled out of the 200m freestyle and 100m backstroke heats on Thursday.

And although he is not expected to keep up with Adrian and Magnussen in the final, his eye-popping performance was the best sign yet that he is on track to make a big splash at the 2016 Rio Olympics.

“I am excited to get that out of the way and hopefully race faster,” Phelps told reporters.

“We were working on just the stroke and today I was saying my stroke felt easier than it normally had so I guess that’s a good thing.

“The first 50 felt really good and I knew I had to win that heat if I wanted a chance to swim in the final.”

Missy Franklin, still battling the effects of back spasms, recovered from her disappointing start to the four-day meet to qualify for the women’s 100m final.

The Colorado teenager failed to qualify for Thursday’s 200m freestyle final and finished third in the 100m backstroke – two of the events she won at last year’s world championships – but was in better form in the 100m freestyle.

She qualified fourth fastest overall in a time of 53.75, well behind Cate Campbell, who stopped the clock at 52.62, the fastest time in the world this year, and the Australian’s younger sister Bronte.

“I am out there now to just have fun,” Cate Campbell said.

America’s new teen queen Katie Ledecky found the 100m too short for her liking, finishing 13th overall. The 17-year-old holds the world record for 400m, 800m and 1500m but is starting to experiment with shorter events and won the 200m on Thursday.

The Pan Pacific championships feature the best swimmers from the U.S., Australia, Japan and Canada, as well as invited competitors from about a dozen other countries, but have added importance for the Americans this time because they double as the trials for next year’s world championships in Russia.