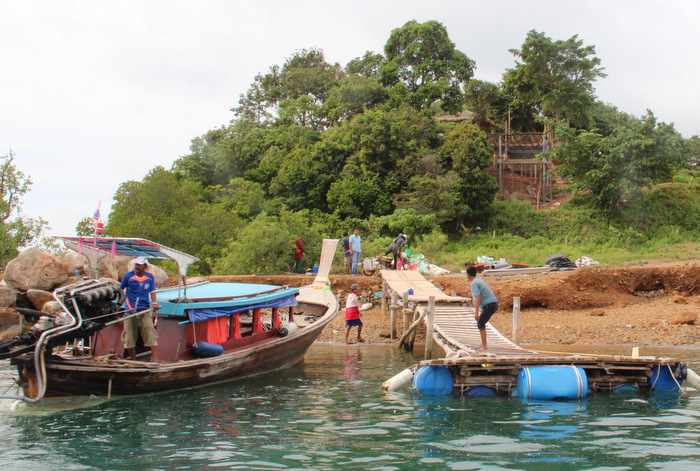 PHUKET: Officials yesterday warned residents on Koh Raet, off the east coast of Phuket, that their buildings will be torn down in 30 days if documentation authorizing construction cannot be produced.

The alleged land owner, Pithirat Phitipak, told Commander Pornprom Sakultem of the Royal Thai Navy Third Area Command and other officials that she bought the seven-rai site in 2008.

“I bought this land from Mr Rat. I cannot remember his last name, but he lived here for more than 30 years,” Ms Pithirat said. “Three families live on Koh Raet. We built homes for our families and one restaurant.”

However, Pa Khlok Mayor Panya Sampaorat pointed out that no land documents had been issued for the site, where the inspection team yesterday discovered four buildings under construction.

“With no land documents issued, nobody can own it. Individuals may have the right to use land to make a living, but no permanent construction work would be allowed,” Mr Panya said.

Mr Panya gave Ms Pithirat 30 days to present any documentary evidence to support her claim to the land.

“In the meantime, all construction must stop and no completed building may be used for any commercial purpose,” he said.

Mayor Panya warned last month that raids would be carried out on many of the small islands off the east coast of Phuket (story here).

Among the islands yet to be targeted are the popular isles of Koh Naka and Koh Naka Yai.