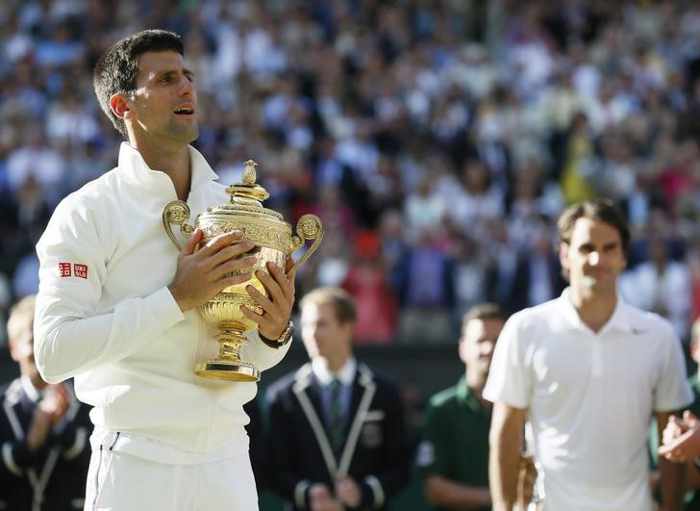 PHUKET: Top seed Novak Djokovic and number two Roger Federer are favoured to wage another title showdown in the last grand slam of 2014, although some emerging young guns have other ideas for the U.S. Open starting on Monday.

Djokovic and Federer’s path to a championship clash could be less troubled than usual with the absence of last year’s winner Rafa Nadal due to a wrist injury, and the sub-par form of 2012 champion Andy Murray since last year’s back surgery.

If the leading men star in the Arthur Ashe Stadium final, it would provide a sequel to their five-set thriller at the All England Club in which a teary-eyed Djokovic hoisted the Wimbledon trophy.

Both claim to be overdue for another taste of triumph at Flushing Meadows.

Djokovic counts just one U.S. title (2011) in his haul of seven grand slams despite reaching the Flushing Meadows final in each of the last four years and five times overall.

Federer, 33, has five successive U.S. Open crowns from 2004 but has gone without since. He extended his grand slam title record collection to 17 by winning the 2012 Wimbledon, which stands as his only slam triumph in his last 18 tries.

Lying in wait for another chance to spring a surprise and trumpet their arrival on the main stage are promising players who made a big splash in London.

Seeded fifth is hard-serving Canadian Milos Raonic, a Wimbledon semi-finalist along with fellow 23-year-old Grigor Dimitrov of Bulgaria, seeded seventh in Flushing Meadows, where girlfriend Maria Sharapova will likely be seen cheering him on.

Also hoping to follow up the fireworks he set off at the last major is 19-year-old Australian Nick Kyrgios, who ousted Nadal in the fourth round before falling to Raonic in the quarters at Wimbledon.

Among the veterans, Australian Open champion Stan Wawrinka of Switzerland is seeded third ahead of Spaniard David Ferrer, with Tomas Berdych of the Czech Republic at number six, two places ahead of Murray, who has shown hints of a return to form of late.

Jo-Wilfried Tsonga of France, who beat Federer in the Rogers Cup final in Toronto, holds the ninth seed while Japan’s Kei Nishikori rounds out the top 10 seeds.

The 27-year-old Djokovic has made some life changes since his last appearance in New York, joining Federer as a family man four days after his Wimbledon triumph when he married childhood sweetheart Jelena Ristic, who is expecting their first child.

The honeymoon, however, may have affected the Serbian’s preparation as the outstanding hard court player, who owns four Australian Open titles on the surface, has had a lacklustre run-up to the Open with a pair of fourth-round exits this summer.

World number one Djokovic has a long way to go to catch Federer both on the grand slam wins chart and on the family front.

In May, Federer’s wife, Mirka, gave birth to their second set of twins. Leo and Lenny were born almost five years after the arrival of twin sisters Myla Rose and Charlene Riva.

Federer has enjoyed strong results this hard court season as runner-up in Toronto and champion in Cincinnati, and the absence of Nadal should improve his chances of getting back to the winner’s circle.

Nadal has been like Kryptonite to Federer, who has lost nine of their 11 career meetings in grand slams and trails in their overall head-to-head by 23-10.

Djokovic and Federer have had a much closer ledger with each player winning six times in their grand slam encounters and the Swiss holding a scant 18-17 edge in career meetings.

Federer has won three tournament titles in 2014, bringing his impressive career haul to 80 victories, while the Serbian has claimed four tournaments this year for 45 career tour wins.

A U.S. Open title for the Swiss elder, ranked third behind Djokovic and Nadal, would vault him past the Spaniard into second in world rankings and into first place in the ATP Race to London for the World Tour Finals should Djokovic fail to reach the final.