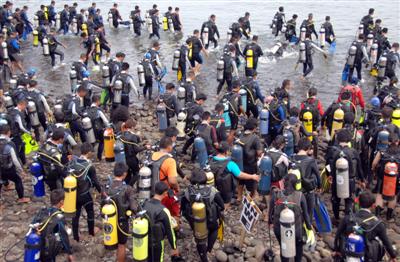 PHUKET: Phang Nga Province, Phuket’s immediate neighbor to the north, is asking divers from all over Thailand to pack their fins, tanks and regulators and head to a diving festival in Thai Muang District on April 3, when there will be an assault on the world record for a mass dive.

Thai Muang is about a one hour drive from Phuket Town.

The festival is organized by ‘Have a Good Dream Co Ltd’, who produce The One Ruam Thai Jai Diew Gan program seen on Thai TV Channel 9, which will televise the mass dive nationwide.

The event was moved up to April 3 after the province became aware that HRH Princess Chulabhorn Valayalaksana would be visiting a group of rural doctors in Thai Muang’s Tambon Lam Phi on the originally scheduled date of April 6.

The mass dive will take place starting at 11am off Thai Muang Beach.

It is hoped that over 3,000 divers will attend the record breaking attempt.

The current world record for a mass dive is held by Indonesia, where 2,486 divers took a simultaneous plunge off North Sulawesi during a festival in August last year.

Under Guinness Book rules, all divers need to descend to a depth of at least 10 meters and stay submerged for one minute.

International news outlets including Reuters, CNN and NHK will be invited to cover the event, Gov Yiamsuriya said. The Gazette’s PGTV also plans to be there to ensure airing on Phuket’s provincial cable channels.

To entice as many divers as possible to attend, free accommodation will be provided in Thai Muang and 50% discounts will be available from hotels and resorts in Khao Lak.

There will also be free transport to the festival from Bangkok aboard air-conditioned buses.

If the record is broken, all those taking part will receive certificates and their names will be recorded for posterity in the Guinness Book, which will have an adjudicator present.

Phuket to get more tsunami buoys