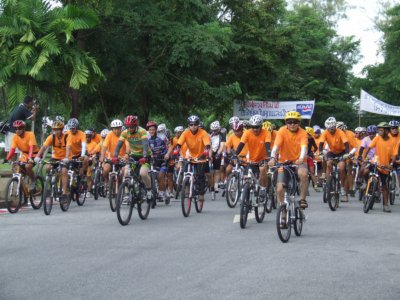 PHUKET: Environmental awareness was given a boost in Phuket on Sunday when about 250 Phuket cyclists took a tour of the island in support of Phuket Car Free Day.

The cyclists covered 40 kilometers on the road trip, which took them through Phuket Town and up to Surin Beach, where they rested for lunch before returning to Provincial Hall via Heroines’ Monument, arriving about 2pm.

Deputy Mayor of Phuket City Municipality Kawee Tansukatanon said the massive turnout of cyclists was “impressive” and that the municipality would “do more to help promote and organize future Car Free Day activities”.