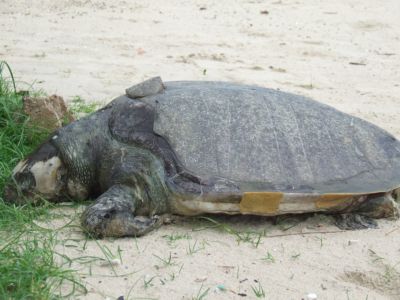 PATONG, PHUKET: A sea turtle was found dead on Patong Beach in front of Impiana Phuket Cabana Resort & Spa about 6am on Saturday.

The olive ridley turtle, found by members of the hotel staff, measured about 50cm long by 43cm wide.

Marine Biologist Phaothep Cherdsukjai from the Phuket Marine Biological Center at Cape Panwa said he expected “the turtle died as a result of getting caught in a trawl and was dead for many days before getting beached.”

“The carcass will be buried right away because it is greatly decayed. Examination can reveal nothing,” he said.

Disappearance of yet another sea turtle is bad news for swimmers: the animals are immune to the sting of box jellyfish or sea wasps, which thus form an important part of the turtles’ diet.

Box jellyfish, while common in tropical waters, are extremely venomous and can kill humans.

Gradual extinction of the turtles contributes to a dangerous proliferation of their numbers.

An olive ridley turtle missing its right flipper was found floating in the sea off Kata Beach last month.

Phuket gears up for the ‘ultimate beach party’