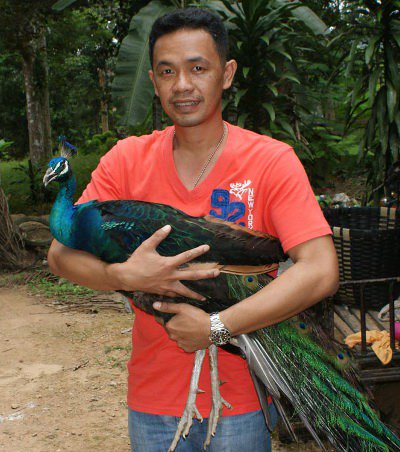 PHUKET: A rubber tapper in Krabi, Phuket’s sister province across Phang Nga Bay, got an unexpected surprise this week when he discovered a live peacock of a species thought to be extinct in the region.

Jamrad Kuannakorn and his wife arrived at a rubber plantation in Khao Kram sub-district before dawn on Tuesday, starting work as usual, when they heard an unusual sound from above.

“We heard an animal noise so loud that we decided to take a look. Following the sound, we discovered a peacock perched on a rubber tree,” said Mr Jamrad.

“When the peacock saw us, it flew off and hid behind a rock,” he said.

The couple sprung into action. Before long the pheasant was chained up and the plantation owner notified of the discovery.

The bird was turned over to the local office of the Ministry of Natural Resources and Environment, where director Jongrak Songrattanapan confirmed it was of a species thought to be extinct in the wild in Krabi.

“This peacock weighs around 4kg. I can’t estimate its age, but I know it is kind of peacock no longer found in Krabi. It must have come from another area,” said Director Jongrak.

“I will give the peacock to staff at Khao Pra Bangkram Wildlife Sanctuary in Khlong Thom District [in Krabi] for care and release back into the wild,” Mr Jongrak said.

From the photograph provided, the bird appears to be an Indian Peafowl (Pavo cristatus), one of two species of peafowl native to Asia.

Although extinct in the wild locally, the birds are commonly found at zoos and in the homes of private collectors throughout Thailand, where the males are prized for their spectacular plumage.