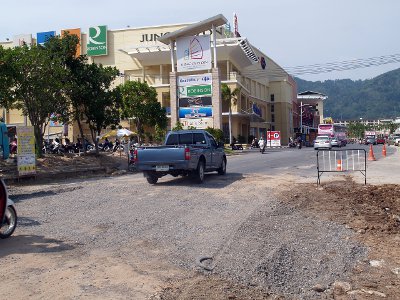 PHUKET: Work on surfacing Phang Muang Sai Kor Road in Patong, which runs behind the Jungceylon shopping complex, will begin before the end of the year, the Phuket Gazette was told today.

“The construction contract was signed in Bangkok and work on the road will start by the end of this year,” Teeraporn Jirarattanakorn, director of the Department of Rural Roads Phuket office, told the Gazette.

The entire 2.9 kilometers of the road, from Phra Barami Road to the intersection with Prachanukroh Road, Nanai Road and Sirirat Road at the south end of Patong, is to be resurfaced.

Work will commence at the Phra Barami Road intersection.

The project is contracted to be complete within three years – now with two years remaining – at a cost of 250 million baht, said Mr Teeraporn.

“The road will be four lanes wide – two lanes each way – with a median strip dividing traffic flow and breaks staggered along the length of the road to allow U-turns,” he said.

“Both sides of the road will also have sidewalks,” he added.

Phuket’s Swedish murder suspects may not do ‘hard’ time