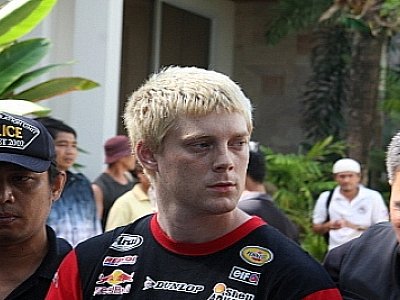 PHUKET: The Swedish duo charged with the August 1 murder of Maksim Schantz would likely serve out their sentences in Sweden, a consular official told the Phuket Gazette.

The pair allegedly were angered that Mr Schantz informed police of a scam operation they had been running out of Pattaya.

Pär Kageby, Senior Consular Officer at the Embassy of Sweden in Bangkok, told the Gazette that based on a prisoner-transfer agreement between Sweden and Thailand, the suspects would have the opportunity to serve out their sentences in Sweden if convicted in a Thai court.

If they are convicted of the murder charges, they would have one month to appeal before sentencing, Mr Kageby said.

According to the agreement, the pair would be required to serve one-third, or no more than eight years, of their sentence before having the opportunity to apply to the Swedish government for a transfer.

If the Swedish government accepts the transfer request, it would then be forwarded to the Thai government for approval, Mr Kageby said.

“The nature of the crime, the convict’s behavior in prison and various other things are considered. If they are positive, [the Thai government] will say ‘Yes’ to the transfer,” he said.

“According to the agreement, it is the Thai sentence that will be served, but so far as I know with other cases, the sentences have been looked upon in ‘Swedish ways’,” Mr Kageby said.

In one high-profile case, Swedish national Karolina Johnsson, popularly known as “the Diplomat’s Daughter” due to her parents’ professions, was arrested in Bangkok in possession of five kilograms of heroin, Swedish newspaper Aftonbladet reported.

Ms Karolina, who wrote a book about her ordeal, was sentenced to serve 45 years in a Thai prison in 1994 before being transferred to Sweden after serving four years in Thailand “under an agreement she would serve the full sentence,” the report said.

She was released from Swedish prison in 2006 after serving a total of 12 years behind bars as the maximum Swedish sentence for heroin smuggling is 14 years, which is usually reduced, the newspaper reported.

Ljung and Soderlund are likely to remain in Phuket Prison at least until a verdict is reached, Mr Kageby said.

They are currently remanded on police request, which is up for review every 12 days. The next review is scheduled for tomorrow.

The police must file the case with the prosecutor within 84 days of charging the suspects, Mr Kageby said.

If they are convicted and sentenced, they will have the opportunity to apply to transfer to other prisons in Thailand, he added.

“We sent a consular officer to visit them last Monday and we normally try to go as soon as possible after someone has been arrested. We made sure they had a lawyer, which they had already arranged, and that everything was going as it should,” he said.

Patong’s “middle road’ to get facelift before Christmas