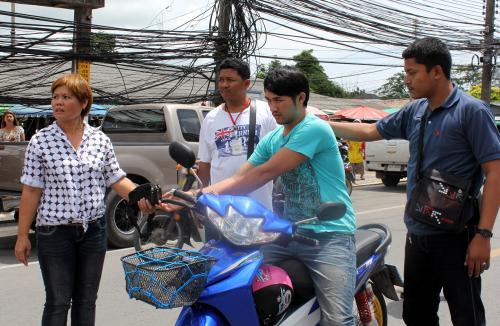 PHUKET: A man borrowed his girlfriend’s motorbike on Tuesday, snatched two purses and rode home, only to be arrested a few hours later.

Ms Zabello noted that he was riding a Blue Honda Wave and remembered the license number, which she reported to police.

About 30 minutes after hearing from Ms Zabello, police got a call from Somsri Weerapong, a vendor who said her bag was snatched as she was walking near Muang Thong market. Ms Somsri, 35, reported that the thief was riding a Blue Honda Wave, and gave them the same license number that Ms Zabello had.

With the plate number, police were able to quickly track the motorbike to a woman who lives in a rented house on Nanai Road near Jungceylon in Patong (map here).

Police went to the house the same afternoon and found Mr Watchara repairing the bike.

He was taken to the police station and quickly confessed, said Col Chaowalit.

Ms Somsri’s purse was found under the motorbike seat, and 1,020 baht of her cash retrieved from Mr Watchara’s pocket. Ms Zabellos’ purse was located in a wooded area in Kathu where Mr Watchara had thrown it. Her mobile phone and passport were still inside.

Police staged a re-enactment of the thefts yesterday, despite promises from Phuket’s new top cop Ong-art Phiwruangnon that “careful consideration” should be made before staging such acts, to better protect the privacy and dignity of suspects (story here).

Mr Watchara was charged with bag snatching. He told police it was his first time to commit the crime.