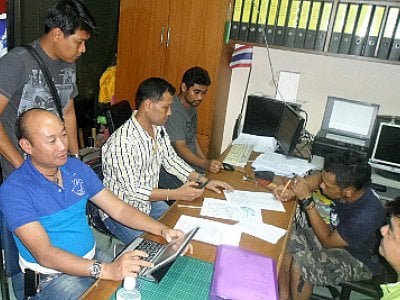 PHUKET: Phuket police have arrested a security guard in Patong wanted on an outstanding warrant for charges related to terrorist activities in Thailand’s restive Deep South.

The man had a bounty on his head of more than one million baht for his capture, said police.

Mr Mahamasakree, who police said also went by the name of Arhamah Mah-useng, was arrested on a warrant issued on February 2, 2004, by the Yala Provincial Court.

The warrant named Mr Mahamasakree as wanted for “being involved with 10 or more persons assembled together to do or threaten to do an act of violence that would cause a breach of the public peace.”

“He was also wanted for possession of an illegal weapon and carrying a gun in a public place without a permit,” said Col Wanchai.

“He said he had been working for the same night entertainment venue on Soi Bangla for more than five years and that he had never committed any crimes.

“He also specifically said that he had never shot a police officer or been involved in making bombs in the Deep South,” explained Col Wanchai.

Mr Mahamasakree has been handed over to Yala Provincial Police for further questioning.

Phuket Police on lookout for snatch artists in Kata