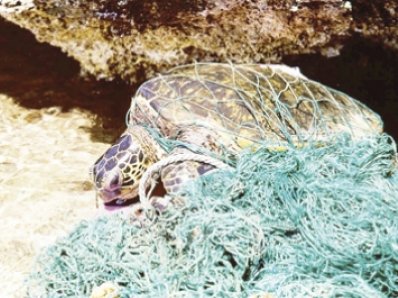 PHUKET: Rubbish. It is ugly; it costs local communities and economies; and it destroys wildlife. Every year tens of thousands of marine creatures, mammals and birds die because of the litter we drop or the fishing nets we abandon and lose at sea. If you are fed up with seeing your local dive site trashed, or rubbish left on Phuket beaches, then join us on September 30 for Phuket’s largest Dive Against Debris effort ever.

This month sees divers all around the world rallying against the growing tide of rubbish, and here in Phuket it is no different. The dive community is pulling together to create the biggest underwater action of its kind in the whole of Thailand.

These PADI (Professional Association of Diving Instructors) dive centers are veteran supporters of the Project AWARE Foundation – a non-profit environmental organization mobilizing hundreds of thousands of divers across the planet to protect our oceans. And this year they have joined together under the umbrella of Go Eco Phuket to maximize their ocean protection efforts and kick off a new wave of Dive Against Debris action right here on our shores.

As Earth’s growing population consumes more disposable goods, the items we discard, even thousands of miles inland, are choking our oceans. But our local actions can contribute to a clean, healthy, future for the ocean. Divers involved on September 30 will remove dangerous marine debris and document all rubbish found as part of the Dive Against Debris survey. Not only will this be made available to local organizations and groups, it will work with similar surveys conducted all across the world to help paint a truer picture of the issues facing our ocean world.

The Phuket dive community has a proud history of removing rubbish from the ocean but despite our best efforts the junk keeps piling up. Be part of the solution not the problem. Join forces with us for Phuket’s largest ocean action: let’s Dive Against Debris.

It is estimated that over 300 divers will take part in this event with ten PADI Dive Centers providing boats to take divers to hotspot locations. Corporate sponsors like PADI, Phuket Gazette, Phuket FM and Phuket Art Advertising are already on board along with dive manufacturers donating marine debris removal gear.

Go Eco Phuket and the Project AWARE Foundation are now looking specifically for ten corporate partners to come on board and each sponsor a Dive Against Debris boat. Your logo will be included on a Dive Against Debris banner displayed on the vessel and you’ll be part of a wider community effort to tackle the growing onslaught of rubbish entering our ocean and destroying our wildlife. Sponsorship of a boat is just 15,000 baht.

Parties and concerts are also planned before and after the event – dates and acts will be confirmed soon.

If you are interested in joining our efforts and being part of the solution, then please contact PADI Regional Manager and Project AWARE Ambassador Tony Andrews on tony.andrews@padi.com.au or contact the Phuket Gazette directly. Or visit facebook.com/goecophuket.

The problem with marine debris

Every year, tens of thousands of marine animals and seabirds die from eating or getting tangled up in marine debris. Here’s the ugly and frightening truth surrounding our mass throwaway culture:

The Dive Against Debris is proudly sponsored by the Phuket Gazette, PGTV and the nationally televised Phuket Today show on UBC/True Visions. Phuket Today, co-produced by PGTV and MCOT World, will be providing coverage of this event. The half-hour show runs six times a day, seven days a week, on channel 99.