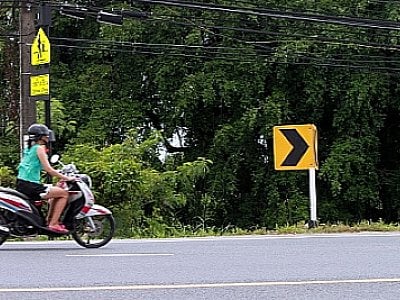 PHUKET: Police have identified the woman whose body was found alongside her motorbike in a roadside ditch opposite Ladthi Wanaram Temple (Wat Tai) on Chao Fa East Road this morning as that of 26-year-old Chanupan Sawangewit.

Police suspect that Ms Chanupan lost control of her motorbike while riding back to Phuket Town after visiting her mother’s house in Soi Koktanod, Chalong, an area just south of where her body was found.

“Ms Chanupan went to visit her mother at 2am this morning, but found out from her stepfather that her mother was already asleep, so she started driving back to Phuket Town,” said Capt Teanchai Dungsuwan of the Chalong Police.

“Unfortunately, no one knew about the accident until 6:40am, when a man who was headed to a nearby pond to fish discovered her body,” he added.

“They will check the alcohol level in her blood,” Capt Teanchai said.