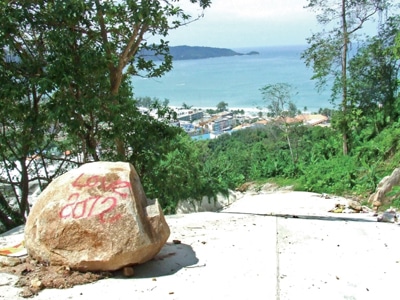 PHUKET: After waiting months for steps to be taken to prevent boulders from tumbling from the Guanyin construction site into their resort, management at L’Orchidee Residences in Patong have hired their own contractor.

Jean-Claude Guillet, the retired developer and the owners’ representative of the resort, explained to the Phuket Gazette that the move follows months of failed attempts to get the contractor to abide by his promise to take full responsibility for the damage caused by the tumbling boulders and to ensure no other boulders roll into the resort.

He referred to an article published by the Phuket Gazette in July in which then-contractor for the site, Thanachart Pibuncharoenpol, agreed to restore villas damaged by tumbling boulders to their original condition and to remove any potentially dangerous rocks still teetering precariously high above the resort.

“Three and a half months later, nothing has been done,” he said.

Wassana Yukunthon, public relations at the resort, explained that lawyers representing the villa owners had sent two registered letters seeking action be taken. The first letter was to contractor Prasert “Opal” Auksornprommarat, because he responded in person to the initial complaint filed at Patong Police Station.

The second letter was sent to Warada Karnkij-o-larn, as she is registered at the Phuket Land Office as the owner of the land in question.

“Neither have replied,” Miss Wassana said.

“So we are proceeding through a claim with our insurance company and we will seek compensation from the project owner later,” she said.

Mr Guillet explained there were at least 17 boulders still precariously supported by tree trunks above the resort and possibly even more on the project site further uphill.

“Four villas remain empty as the owners are too scared to return,” Mr Guillet added.

“We have sent more letters asking to have them removed, but we have received no answer,” he said.

The work to restrain the boulders will cost about 600,000 baht, said Mr Guillet.

“We are trying not to have to sue the project owner. If the claim is accepted, there will be no problem as there would be no reason to sue them. And we want real protection, not just people saying so,” he added.

Somkiat Limpanapa, Managing Director of 11 GEO Engineering Company, which is carrying out the work, said, “Removing the big rocks is quite difficult, so we will cover the rocks that are on the steep slope with an iron net to keep them securely in place.”

Repairs to one villa damaged by a boulder weighing two tonnes is underway, he added.

The repairs to the villa should be complete by the end of this month, while work on restraining the boulders began last week, he added.

Meanwhile, the cleanup at Kok Makham village, which was inundated by a mudslide from the same project site, is now complete.

Kok Makham resident and former elected community leader Chatchapol Khamintong, 48, told the Phuket Gazette, “The project owner has already cleaned the roads and storm drains that were covered by the landslide from their project. They have also fixed some minor damages to houses.”

All heavy machinery for conducting earthworks had been removed from the construction site, as the project owner Chaianan had promised in a meeting with officials on October 19, he added.

“However, we will follow up closely on whether they will keep their promise of installing concrete retaining walls to prevent any future landslides,” he said.