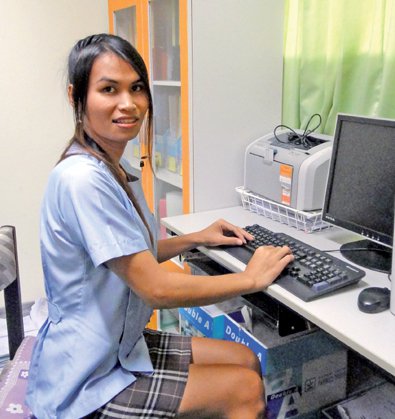 PHUKET: Bad news moves quickly – constantly – and there is a cast of usual suspects who society likes to push the blame on, people who are “different” or somehow not representative of the whole.

Who are they? Illegal immigrants, stateless people, migrant workers and essentially any other minority group that has the misfortune of being a convenient scapegoat. One such “group” of people that is closely watched and often stigmatized in Thai society is the transgender community: katoey.

Katoey are born, raised and registered in the Kingdom of Thailand. They are, and have been, an integral part of Thai society dating back to at least the Rattanakosin period in the 18th century. However, in the mainstream psyche, katoey are placed on the the fringes of the Thai social fabric.

Loud, aggressive and violent are all stereotypes associated with the transgender community, especially in Patong – a classic case of “one rotten apple spoils the whole barrel”.

However, there are “good apples” that have chosen a different path, but not without adversity.

Toedsak “Gai” Kaipraiwan, 30, earned a bachelor’s degree from a university in Sakon Nakhon, her home province in Northeastern Thailand (Isarn).

“I got a degree in education because I have always wanted to be a teacher, since I was young. Educating people has always been my passion,” Gai said.

“Dreaming about it is one thing, but making it reality is something completely different.

“When I graduated, I couldn’t wait to find a job teaching, but it wasn’t as easy as I thought it would be.

“I grew my hair long, like a woman, and I dressed like a woman when I went to apply for jobs. I can’t remember how many schools turned me down, even though I have an excellent academic record and great teaching skills,” Gai recalled.

“After months of trying, I finally got a job teaching English and Thai languages at a vocational school in Sakon Nakhon.

“The students respected me for who I am, not only because I was their teacher, but because of my ability – I was good at what I was doing. The only problem I had was with other male colleagues. They treated me differently and didn’t respect me.

“The worst part was that they always thought of me as a joke – they never took anything I said or did seriously.

“The same was true with people in my hometown. I realized that they thought of me as the joke of the community, so I decided to move somewhere that I could be respected,” Gai said.

Gai moved to Phuket seven years ago and took a job at the reception desk at a hotel.

“I got along well with my colleagues. Even though we didn’t hang out together after work, I knew that they respected me,” she said.

She worked at the hotel for three years before taking a position as a counselor and coordinator at the Sabai Dee Clinic at Patong Hospital. The clinic provides blood tests, counseling services and an anonymous HIV clinic for transgender and homosexual people in Phuket.

Gai is happy in her new position where she advises transgender people on how to practice safe sex and how to take care of themselves if they are already infected with HIV or an STD.

She said it’s fulfilling in that she can make use of her training and skills as a teacher.

“I’m no longer discriminated against, but that’s not the best part of my career. The best part is that I am doing public work for people born with the same identity as me, as katoey,” she said.

Not all transgenders have struggled with finding the right job.

Tintinarn “Um” Homroskla is a 23-year-old Phuketian with a degree in business administration from a local vocational college.

“I started working as a cashier at a store in Phuket International Airport as soon as I graduated. I was 18 years old,” Um said.

“I had no problem getting the job and I got along fine with my colleagues. Even though there was nothing exciting about my job, it was my plan to start from something small and work my way up.

Um moved from cashier to sales agent at a housing estate to receptionist at a spa and now is the manager of Andaman Power Organization, a local non-governmental organization working directly with the Lesbian, Gay, Bisexual and Transsexual (LGBT) community in Phuket.

“Since I am a part of this community, I might as well take an active role in it,” she said.

The organization, among other things, conducts workshops for the LGBT community around Phuket, including sex workers in Patong.

“Once a year we have a big meeting with the Phuket Provincial Health Office where we report on our work. I was really scared at first.Part of it was because of my personal experience with non-transgender people – they usually look at us in a negative way and I wasn’t sure if anyone would pay attention to what I said.

“I was wrong: everyone listened,” Um said.

“This job has helped build my self-confidence and I hope some day that what I, and many others like me who are professionals, am doing right now can gradually change the way people see us,” she said.

Many Thai employers look more at which educational institute the applicant graduated from than they do at personal experience. However, this principle does not apply to transgender people.

Sompol “Wicky” Sitthiwetch, 30, has a bachelor’s degree in hotel management from a top university in Phuket.

“I realized it would be difficult for me to get a job in the hotel business, so I accepted a job from my friend who owns a company. It was as a web developer for a hotel booking website – not exactly what I wanted to do, but I knew it wouldn’t be easy for me to get a job somewhere else,” Wicky said.

“After working there for two years, I decided to challenge myself more so I went job hunting.

“After approaching many hotels and companies, I started to understand more about
discrimination. Some hotels wanted to hire me, but they asked me to cut my hair short and ‘appear as a man’.

“I turned them down because I won’t do anything that forces me to change who I am,” she said.

Wicky finally found a job at a small hotel on Soi Paradise, an area popular for its gay nightlife scene in Patong.

She is also a volunteer at the Sabai Dee Clinic, where Gai works.

“I share knowledge about safe sex and HIV/AIDS to sex workers on Soi Paradise, which has been easy and rewarding for me as everyone here knows me and respects me.

“The hard-to-reach people seem to be the katoey sex workers on Soi Bangla [in Patong] – they seem to not want to cooperate, so I get to them through their mama-sans,or pimps,” Wicky added.

“I know there are still a lot of nightclubs in Patong that ban transgender people from entering. At first I was upset, but I kind of understand their situation. Transgender people did bring a bad image to those venues.

“I just want to encourage all transgender people to help improve our image and let everyone know that a lot of us are quality people and we belong in society as equals,” Wicky said.