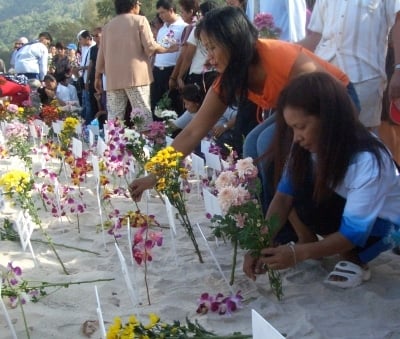 PATONG: About 500 people attended an interdenominational memorial service held at Loma Park this morning for the victims of the tsunami.

The ceremony, organized by The Patong Business Operators’ Club, Patong Hospital and Patong Municipality, was to remember those who perished in the tsunami and to help bring peace of mind to those still suffering from its after-effects.

Clerics from the local Christian, Sikh, Muslim and Buddhist religious communities conducted religious rites starting at at 8:30 am at Loma Park, where signs bearing the names, ages and nationalities of all known victims were placed in the beach sand nearby.

Bob Brown, a tourist from Pennsylvania, USA told the Gazette that he really appreciated seeing people of so many religious faiths coming together in one place to mourn the victims.

“I just arrived in Phuket yesterday, and this is my first time here. I’m glad to come here for a visit and to help people as much as I can. Today really shows that people here want to let all the spirits find peace,” he said.

The memorial service marked the beginning of a three-day series of evening concerts intended to cheer up tourists and residents alike.

To be held on the stage on Soi Bangla, which has been closed off to traffic, tonight’s concert will begin at 7 pm with a performance staged by Safari Pub.

This will be followed at 8 pm by an Isarn ceremony known as fai phu kaen, in which participants tie sacred cord around one another’s wrists to help release bad luck, and return frightened and confused souls to those who have been traumatized.

The evening will conclude with a concert by an ensemble featuring members of the Bangkok Symphony Orchestra, at 8:45 pm.