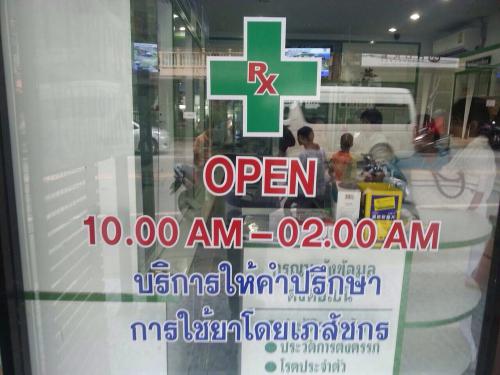 PHUKET: Public health officials are investigating a Patong pharmacy suspected of selling cough syrup to Phuket teenagers for the purpose of making the illegal 4×100 narcotic cocktail.

Cough syrup is a key ingredient of the cocktail, which includes kratom leaves.

“Officers arrived at the shop at about 6:30pm yesterday, conducted a stock-check and found no fewer than 500 bottles of cough syrup.

“While the officers were checking the stock – over the course of about 90 minutes in the evening – about 10 teenagers dropped by to buy the syrup,” he added.

Only one employee was at the shop when the officers arrived, and she told them that the pharmacist had gone out.

The officers asked to see the register of medications bought and sold by the pharmacy, as required by law, but she could not produce it.

“The officers then asked the employee to tell the pharmacist to present the required documentation at the Phuket Provincial Health Office before the weekend. If the pharmacist fails to do this, we will pass the case on to the police,” Mr Veera said.