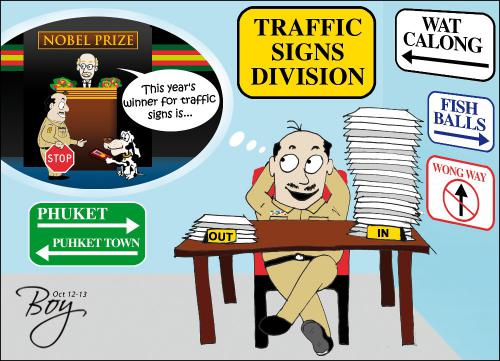 PHUKET: Thailand can claim credit for some of Southeast Asia’s most high-profile land transport boondoggles, yet often overlooked is the long-standing and scandalously in-your-face inadequacy of the Transport Ministry to provide drivers with one of the most basic motoring necessities: accurate and informative road signs.

We live in an age of amazing geographic technology. Cars, cameras and other electronic gadgets come equipped with global positioning satellite technology capable of providing real-time spatial information with almost pinpoint accuracy, at least for those who take the time to use it.

We suspect that the powers-that-be in the Land Transport Department and other responsible agencies are not among them. It would be impossible to estimate the number of lost man-hours, mega-liters of wasted petroleum and amount of sheer frustration resulting from poorly conceived, badly maintained road signs throughout the Kingdom.

The problem spans national, regional and local dimensions and demonstrates a lack of co-operation and integration among the numerous agencies involved. In rural areas, important road signs are typically covered with moss or obscured by vegetation. In most cases, such problems could be easily solved with the most meager of budgets and buckets, sponges and gardening shears. Yet they go ignored, giving our highways an appearance of decay and neglect that is particularly striking in contrast to all of the colorful advertising signage that is allowed to compete for our attention.

Where they are legible, road signs are often inaccurate, if not completely misleading. As just one example, route marking signs invariably fail to indicate whether segments of national highways are heading north or south, east or west.

Here in Phuket, authorities seem more interested in raking in additional income from “official” road signs guiding motorists to private-sector businesses than getting them from any generic “Point A” to “Point B” as quickly as possible.

Indeed, the most basic form of geographical literacy appears lost to the people who authorize, design and install road signs. Why else is the island littered with signs indicating “turn right” or “turn left” to get to Phuket, when the entire province is Phuket? These guideposts are mind-boggling even for local residents; one can only imagine what it must be like for newcomers trying to get their bearings.

Foreign readers who cannot read Thai may be misled into thinking that the root of the problem is a matter of important information being “lost in translation”. That is hardly the case; the situation is equally appalling in the vernacular.

Much has been written and said about Thailand’s readiness for the terms of the Asean Economic Community agreement set to launch in 2015. A good place to start would be to appoint a road sign “czar” to overhaul, standardize and lend some simple common sense to road signage throughout the country.