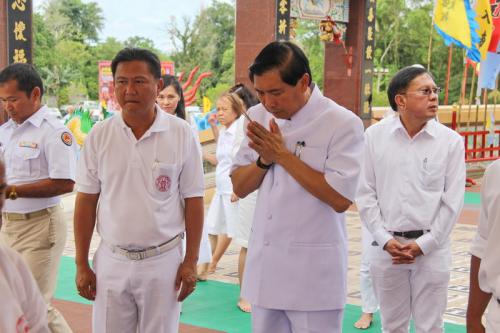 PHUKET: Occupancy at beach and Phuket Town hotels during the Vegetarian Festival is at 85 per cent or higher, said Governor Maitri Inthusut.

As he took part in festivities at the Tha Rua shrine yesterday, the governor noted that hotels along parade routes in Phuket Town were fully booked. Even hotels not on the parade routes – those at island beaches – are reporting 85 to 90 per cent occupancy rates.

“This year so far the number of tourists has increased by 19.85 per cent over last year,” he said. “We are only 20,000 visitors short of reaching 11 million visitors.”

The statistics he gave showed that visitor numbers have held steady since the end of April this year, when Prathuang Sornkham, the director of Phuket International Airport, reported that arrivals were up 12 per cent over 2012 (story here).

Gov Maitri said that steps had been taken to ensure that festival visitors were safe and local residents inconvenienced as little as possible during the festival.

Special police teams have been deployed to maintain public safety and to keep traffic flowing as smoothly as possible in areas near parade routes, he said.