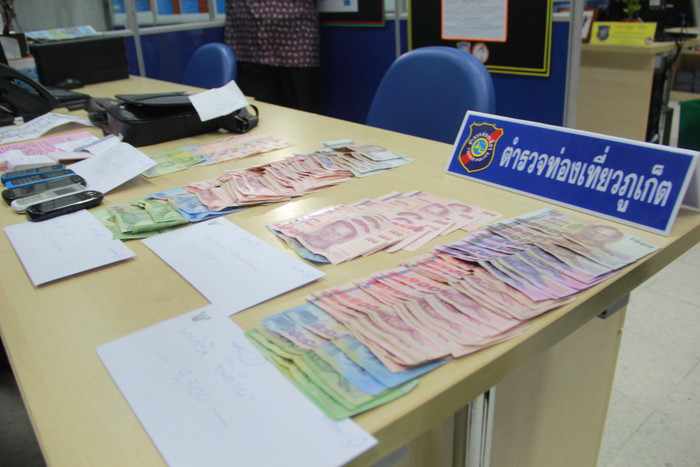 PHUKET: More than 90 per cent of Patong Beach vendors are in loan sharks’ books revealed Phuket police after busting a gang of four yesterday.

“We received a tip-off from an out-of-work, debt-ridden beach vendor about four men in Patong who were charging 20 per cent interest on loans and harassing customers who weren’t able to make their daily payments,” Tourist Police Deputy Superintendent Milin Pianchang told the Phuket Gazette.

The legal maximum that can be charged is 15 per cent.

“More than 90 per cent of beach vendors are reliant on loan sharks,” said Maj Urumporn Koondejsumrit of the Phuket Tourist Police. “The standard loan was a 24-day loan of 10,000 baht, where the men would collect 500 baht a day from their customers.

“Since officials pulled everything from the beaches and prevented vendors from returning [story here], many of them are now unable to pay their loans.”

Tourist Police set up an appointment with the loan sharks on Thaweewong Road and sent an undercover officer to act as a customer after the men were identified by the vendor.

After the exchange, officers swooped in to make the arrest.

“We searched the suspects and found 22,450 baht, including the 500 baht note we used in the sting operation. We also seized a book with a list of customers,” Col Milin explained.

All four suspects were charged with operating and assisting in an illegal loan business and charging illegal interest rates.

“All four have accepted the charges against them,” Col Milin added.