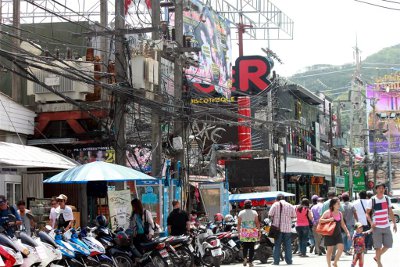 The popular nightclub was reportedly packed with tourists when the fire broke out. Four people died in the blaze.

Atipong Thongyon this morning told the press, “We have checked the transformer and it is operating normally. Another transformer, belonging to Tiger Discotheque, is also working normally.”

He explained that the PEA transformer for the section of Soi Bangla where Tiger Discotheque is located is about 50 meters from and on the same side of the road as the popular nightclub.

The transformer is rated at 250kVA (250,000 volt amps), which is suitable for housing and small businesses, said Mr Atipong.

The transformer that powered the Tiger Discotheque is located on a roof above a bar at the end of a small street that joins Soi Bangla.

“Tiger’s transformer is rated 400kVA, which is suitable for a big entertainment venue,” Mr Atipong explained.

“Both of the transformers are fine,” he confirmed.

Mr Atipong said that the electricity went off at 3:52am, before reports of the fire circulated.

Mr Atipong said that the power supply to the nightclub’s transformer has been cut as a safety precaution.

“Which means the bars next to Tiger Discotheque have to remain closed as they have no electricity. After everything has been checked and confirmed to be safe, the power supply will be restored to the businesses,” he assured.